The societies of Armenia and Turkey are divided by a long history of painful disagreement. After Armenia became independent, Turkey was one of the first countries to recognise it, however, the land border between the two countries remains sealed. Turkey did not open its land border with Armenia because of its support to Azerbaijan in the Armenia-Azerbaijan conflict over Nagorno-Karabakh. All attempts to eliminate that standoff over the last 25 years have proved unsuccessful. Attempts have been made several times at the governmental level, the last one being the process of ‘football diplomacy’ which started in 2008 and ended in drafting two Protocols in 2010 for opening the borders and establishing diplomatic relations. Unfortunately, both countries refused to ratify them until today. Since 2016, the political climate in the region, particularly in Turkey, worsened, and the sense of insecurity among the societies on both sides of the border increased.

The absence of a comprehensive normalization between the two societies resulted in an effective unawareness of and suspicion to each other’s past and present and geo-political aspirations. Armenians in Armenia and the Diaspora do not know about the opinions and debates that take place in Turkey. Citizens of Turkey have no sustained access to the opinions in Armenia. In the absence of such information, misperceptions persist. The pervasive lack of information about the ‘other’ society, mistrust that has been built up over the last century, and closed land borders have resulted in a lack of initiative for professional, scholarly, academic or artistic cooperation. The closed land border between Armenia and Turkey is often referred to as ‘the only part of the Iron Curtain which is still in place’. Eurasia Partnership Foundation (EPF) and its partners inside Armenia and in Turkey do believe that this iron curtain should be removed. They believe that the dialogue between the societies of Armenia and Turkey is fundamental as a sustained, strategically necessary step toward the future normalisation of relations and eventual reconciliation.

Overall, EPF’s regional programming aims at contributing to regional security and stability by building links among individuals and civil society groups in different countries who face similar problems and are working toward common goals. Since the late 1990s, through a number of operational projects and grants to local organizations, EPF has supported collaborative cross-border initiatives between partners in Armenia, Azerbaijan, Turkey, and Georgia. These initiatives developed common approaches among engaged citizen groups to address shared regional challenges ranging from independent media dialogue to cross-border civic interaction on European integration, from consumer rights protection to peace- and confidence-building.

EPF launched its Armenia-Turkey Dialogue and Cooperation program in 2006, and supported bilateral independent research, conferences and discussions, and other types of cross-border partnership programs. In 2010-2012, EPF in a consortium with three other Armenia-based organizations implemented the USAID-funded ‘Support to Armenia-Turkey Rapprochement’ (SATR) project that aimed to contribute to the normalization of Armenia-Turkey relations by facilitating engagement between civil society groups, establishing and developing business partnerships and regional professional networks, and enhancing understanding between the people for peace and economic integration in the region. Since 2014, EPF is leading a consortium of four Armenia-based and four Turkey-based organizations to implement an EU-funded ‘Support to the Armenia-Turkey Normalization Process’ (ATNP) project. ATNP aims to promote civil society efforts towards the normalization of relations between Turkey and Armenia and towards an open border by enhancing people-to-people contacts, expanding economic and business links, promoting cultural and educational activities and facilitating access to balanced information in both societies.

END_OF_DOCUMENT_TOKEN_TO_BE_REPLACED 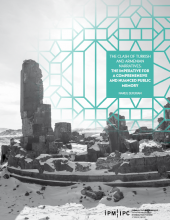 The Clash of Turkish and Armenian Narratives: the Imperative for a Comprehensive and Nuanced Public Memory
This study shall very briefly discuss the concept of the narrative, then present the Turkish and Armenian narratives (in particular those espoused by…
END_OF_DOCUMENT_TOKEN_TO_BE_REPLACED