Youth Participation in Community Development: Small in Scale but Significant in Impact

Youth Participation in Community Development: Small in Scale but Significant in Impact
(part of the CELoG program)
25-27 December, 2015, Yerevan

Do young people from rural communities have access to self-development resources? What are the ways of affecting decision-making in their communities? How can they use their talent to bring a positive change in their community? How can they pass the joy from their accomplishments to the larger society? Since 2007, the YouthBank (YB) program managed by Eurasia Partnership Foundation (EPF) gives answers to some of these questions. 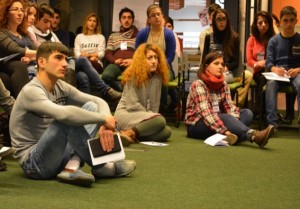 Forty young people from nine regions of Armenia, eager to learn how to participate in the community development, were selected through a competitive process to become YouthBank committee members and cooperate with the Civic Engagement in Local Governance (CELoG) program funded by USAID.

The first three-day workshop for this group took place on December 25-27, 2015, in EPF’s convening space. The objectives of the workshop were to help young people understand how local governance works, and learn and discuss the opportunities for youth involvement in the community life. Participants learned how the YouthBank model works for community participation. In particular, they learned how to conduct local surveys and think critically, design, evaluate and implement small scale development projects, how to engage the community in their projects, and how to make transparent decisions.

“I personally protected the rights of 1600 people – by not allowing the falsification of voting at the Constitutional Referendum; as a result, in my polling station we had 333 “yes” and 333 “no” votes, to the surprise of the ruling party representatives…”, – said Hakob Hakobyan from Martuni community, in reply to the question “why volunteering is important”.

Sofya Harutyunyan, from Gyumri, says: “Two years ago, I implemented a charity project called “Santa for All” funded by Gyumri YouthBank. Since then, I have been dreaming about becoming a member of the YouthBank committee myself and being able to do more than just one project”.

Vahan Movsisyan, President of the Community Finance Officers’ Association (CFOA) and the Chairman of the Board of the CELoG program, explained in his speech that young people would become very effective members of the society if they knew their rights, understood the functions of LG, cared for the community needs, demanded their rights and increased local responsibility and accountability by active participation in LG and community development.

Knarik Ayvazova, Program/LG Expert from CFOA introduced the ongoing reform processes in LG, the structures of LG and areas of possible collaboration. This background knowledge will become the grounds for young people while building plans on how to cooperate with and engage LG in their projects. 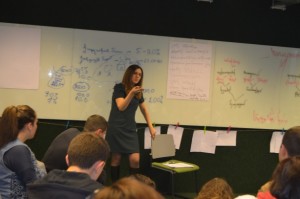 The YouthBank committee members will start their projects soon while also engaging in local decision-making at the community level. They will conduct local surveys to understand the problems and possible motivations of youth participation. They will announce competitions and receive applications from young people for youth-led community initiatives. They will cooperate with local governments to find out cross-cutting opportunities to integrate the contribution of young people with the local government’s longer-term strategies. It is anticipated that by the end of 2016, YouthBank committee members will motivate at least 150 young people to implement 27 specific initiatives in their communities – small in scale but significant in impact.

EPF’s multi-year experience with the YouthBank program demonstrates that when youth are included in community development strategies as key players, they become lifelong community leaders in their areas of interest, and acquire a strong sense of ownership in local development efforts.

The CELoG program also creates opportunities for young people from rural communities to cooperate with civil society organizations (CSOs), such as the project leader, CFOA, as well as other members of the CELoG consortium. CELoG’s implementing organizations will share their knowledge and skills with the community youth and help build their self-confidence that they can grow as informed and engaged citizens.

Overall, the participants of the three-day workshop wereinspired by the amount of knowledge and information received, as well as by the great responsibility that CELoG puts on their shoulders: they will go back to their communities and design their own initiatives for engaging many other young people in community projects. We wish them success. 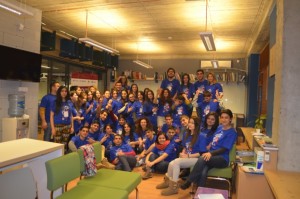 The CELoG program is jointly implemented by the Communities Finance Officers Association (CFOA) in a consortium with the Information Systems Development and Training Center (ISTDC), the Yerevan Press Club (YPC), the Asparez Journalists’ Club (AJC), Eurasia Partnership Foundation (EPF), and the Caucasus Research Resource Centers-Armenia (CRRC), and is funded by the United States Agency for International.