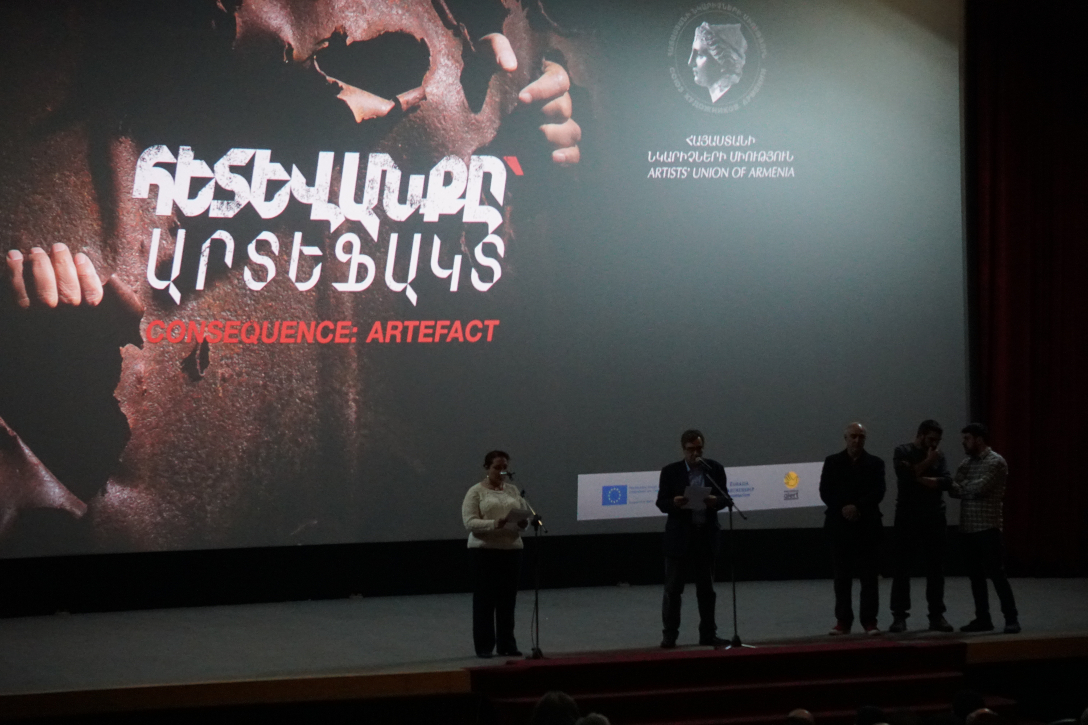 The exhibition was attended by representatives of the government, civil society, academia, and others. Deputy PM Tigran Avinyan, Deputy speaker of the Parliament Alen Simonyan, Minister of Education, Science, Culture and Sports Arayik Harutyunyan and other officials were among the guests during the screening and exhibition.

The “Consequence: Artefact” project aimed to offer an alternative discourse where the Nagorno-Karabakh conflict is considered from a different perspective; the one that reveals not the political, economic or social consequences but the traces of the conflict located along the line of contact. In the course of the project, the two implementers searched for and selected material shreds of evidence related to the conflict, and transformed them into works of art.

In her reference to the project, an art historian and art critic Yelena Aydinyan writes: “Turning tragic events into works of art, talking about them in the works of art, keeping them alive through works of art, and in general, the relationship between disaster and art are problematic. If such a work of art is influential, it implies that the perceiver is overwhelmed by the tragedy the work of art embodies. The more successful the embodiment is, the deeper is the impact.”

A curator and photography historian Vigen Galstyan mentions: “The collaborative project “Consequence: Artefact” is an attempt by Areg Balayan and Edik Boghosian to investigate and represent the aftereffects of the frozen military conflict in Nagorny Karabakh. By taking an archaeological approach, these artists aim to break-through the partisan barriers that divide people across enemy lines. The combination of salvaged metallic remnants from war-torn buildings and photographs of residents who live in the conflict zone is built on a fascinating interplay between historical traces and the living present. It is a space where trauma becomes naturalised and internalised, affecting the way people see their lives, the world and the future.”

“Our activity addresses a controversy that our societies have inherited because of the unresolved conflict, that is – the misleading controversy between peace-building and patriotism. This project is a brilliant example to prove the controversy fake and fictitious”, said EPF CEO Gevorg Ter-Gabrielyan in his opening speech before the screening of the film. He also noted that “this and similar projects charge our relations with humanism which is necessary for the restoration of civilized relationships.”*

The event was covered by both local and international media agencies. Civilnet, Investigative Journalists Hetq Online and others reported about "Consequence: Artefact".

The exhibition will be open for public in the same venue through February 28, 2020.

The exhibition and the film were already presented to public in Stepanakert and Tbilisi during November 2019.

The photo-stories of the project also became one of the finalists of LensCulture Exposure Award 2020.

The catalogue of the project can be found here.

The “Consequence: Artefact” project has been supported by the EU-funded ‘Peacebuilding through Capacity Enhancement and Civic Engagement’ (PeaCE) programme.

*The whole speech is available here.