The Armenia-Turkey Cross-border program aimed to improve dialogue and cooperation between representatives from Armenia and Turkey who operate in non-government and private sectors.

Relations between Armenia and Turkey have been strained and burdened due to a long history of conflict. Armenian-Turkish relations deteriorated further in 1988, at the start of the conflict between Armenia and Azerbaijan over the status of the Nagorno-Karabakh enclave. As a result of the fighting, Turkey imposed a blockade on all overland trade and transportation with Armenia, thereby cutting off the country’s main trade routes with Europe.

In other regions of the world, cross-border partnerships established between non-government organizations through Track Two Diplomacy (T2D) have proven to be an effective tool for conflict resolution, which contributes to the acceleration of official, Track One Diplomacy initiatives. In Armenia and Turkey, various civil society groups, businesspeople, local governments, and journalists have established cross-border contacts, and in some cases have jointly implemented programs. However, these initiatives have been few and generally ad hoc in nature.

The Armenia-Turkey Cross-Border Dialogue and Cooperation Program, launched in 2006 by Eurasia Partnership Foundation (EPF), will contribute to the normalization of relations between Armenia and Turkey by strengthening the capacities of non-government, local government and business sectors to develop and maintain cross-border partnerships. The program will also support initiatives designed to inform key stakeholders of the potential benefits of T2D initiatives, inform the general public of the potential impact of a border opening, and support initiatives for the establishment of cross-border links. By supporting cross-border initiatives between Armenian and Turkish citizens, the process of normalizing relations between Armenia and its neighbors may start to begin and gradually gain momentum.

In 2006, Eurasia Partnership Foundation supported several research initiatives with the goal of increasing understanding among government representatives, civil society and the general public on Armenian-Turkish relations.

The International Center for Human Development (ICHD) in Yerevan carried out an assessment of best practices in Armenian-Turkish Track Two Diplomacy Projects. EPF also provided support to the Armenian International Policy Research Group (AIPRG) to conduct two research projects examining the distributional consequences of a border opening on the Armenian and Turkish economies and the capacities of local government authorities to respond to a border opening.

The results of these studies were presented at an international conference in Yerevan in early 2007 and at roundtable discussions on Track Two Diplomacy in Armenia’s regions, Yerevan, Ankara, and Istanbul. Each roundtable discussion was used to disseminate the results of the research on Armenia-Turkey relations to a broader audience; to identify possible areas of cross-border cooperation between civil society, media organizations and local government; and to shape EPF’s program approach in this area.

In 2006, Eurasia Partnership Foundation supported several research initiatives with the goal of increasing understanding among government representatives, civil society and the general public on Armenian-Turkish relations.

In light of the European Integration

Recent EU accession talks with Turkey, as well as the inclusion of Armenia in the framework of the European Neighborhood Policy, have put additional pressure on the two countries to resolve their differences and improve relations with one another. 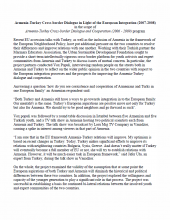 Armenia-Turkey Cross-border Dialogue in Light…
Recent EU accession talks with Turkey, as well as the inclusion of Armenia in the framework of the European Neighborhood Policy, have put additional… 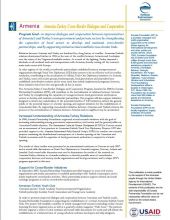 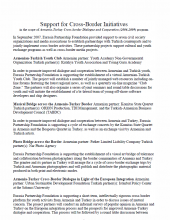