The Engaging Civil Society in Monitoring Conflict of Interest Policies project was a two-year project funded by the European Union. It was an international project that was being implemented by a consortium of organizations from Armenia, Moldova, Poland and Ukraine and was led by Transparency International Moldova. The project had launched in July 2013 and had lasted until July 2015.

The overall objective of the project was to consolidate the capacity of CSOs in monitoring conflict of interest policies and synergizing efforts to conduct a constructive dialogue with governments to improve the quality of their policies.

In November 2013-March 2014 EPF had conducted a survey in a number of Armenian state institutions to identify the perceptions and level of understanding of Conflict of Interest (CoI) policies among public servants. The survey had been done in the seven Armenian ministries with participation of 134 public servants.

The survey had been followed by a focus group meeting representatives of key institutions and management of staffs of Armenian ministries. The collected data was used to develop a set of recommendations to state institutions, civil society and the international organizations working in sphere of CoI policies and anti-corruption on legal, policy and practical improvements in management of CoI situations. 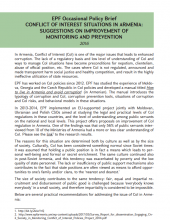 EPF Occasional…
In Armenia, Conflict of Interest (CoI) is one of the major issues that leads to enhanced corruption. The lack of a regulatory basis and low level of… 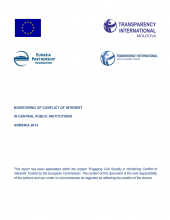 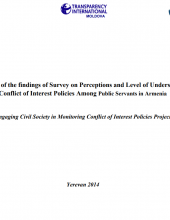 Brief report of the…