Vayk, Armenia – The Communities Finance Officers Association and partners marked the official opening of the new InfoTun (Information House) in Vayk on June 13. The Vayk InfoTun was established within the framework of the Civic Engagement in Local Governance (CELoG) program, funded by the U.S. Agency for International Development (USAID). Representatives of the local government, civil society, media, USAID Armenia and implementing partners attended the opening ceremony. 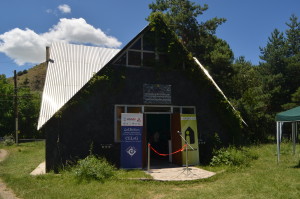 Since 2011, USAID has supported the establishment of InfoTuns to boost media literacy and the use of new media in various corners of Armenia. The Vayk InfoTun is the eighth center of the InfoTun network after Vanadzor, Gyumri, Martuni, Armavir, Goris, Ijevan and Ararat. Run by young activists, InfoTuns serve as information sharing hubs that engage in local community life. They organize activities ranging from media literacy trainings to film screenings and “flash mobs” that raise public awareness on issues of local importance. InfoTuns also initiate public discussions on local governance, human rights, youth, social policy, and public accountability at the local and national levels.

During the opening event, Nouneh Sarkissian, Managing Director of the Media Initiatives Center, commented on the InfoTun network: “InfoTun is not simply a place where one can receive news. It is a place for people who value information. When creating the InfoTun network through the former USAID-funded alternative mediaproject, we hoped that these centers would give birth to new leaders and citizen journalists who would tell many important local stories to the country and, why not, to the whole world. This dream is coming true now,” she said.

CELoG Program Director David Tumanyan believes that the InfoTun network can contribute to the goals of
the CELoG program. “InfoTun is an important initiative, which brings together young people to discuss community problems and find solutions. Young people have progressive thinking and InfoTun supports them to disseminate their ideas, to promote a sense of ownership and teamwork,” Mr. Tumanyan noted.

Following the ribbon-cutting ceremony, three USAID-funded programs – CELoG, Media for Informed Civic Engagement, and the CSO Development Program – presented their project activities and avenues of collaboration with the InfoTun network. Representatives of the newly opened InfoTun, which will be run by Work and Motherland NGO shared current community issues and near-term priorities.

Dr. Anna Ohanyan About the Roadblocks to a Nagorno Karabakh Settlement
04-2020