Under Article 46 of the European Convention on Human Rights, Member States are obliged to comply with the final judgments of the European Court of Human Rights in each case in which they are parties. Implementation oversight is exercised by the Committee of Ministers. Thus, States undertake to take individual and general measures to eliminate violations of the applicants' rights accordingly (in an attempt to restore the situation existing prior to the violation) and to prevent new similar violations.

The effectiveness of the European Convention on Human Rights is largely dependent on the level of execution of judgments of the European Court of Human Rights, which in turn presupposes a continuous process of compliance of domestic legislation and law enforcement practice with the standards set by the Court.

However, the recurrence of applications to the European Court of Human Rights concerning identical violations indicates the existence of a systemic problem that gives rise to breaches of the law and indicates the need to take adequate preventive measures.

This study aims to identify issues related to the execution of judgments concerning breaches of Article 6 of the European Convention on Human Rights, both at the level of legislation and law enforcement practice, and seeks to improve the human rights protection system in Armenia, the proper exercise of the right of citizens to a fair trial and the exclusion of any recurrence of registered violations in the future.

Within the framework of the research, a number of judgments against Armenia were singled out, concerning violations which were considered more problematic from the point of view of the legislative or legal implementation issues underlying them. As a result of the analysis, certain solutions were proposed to prevent the identified violations.

We hope that the conducted research will be useful for the competent state bodies as regards keeping the identified issues in focus and finding systemic solutions, as well as contributing to an increase in the level of protection of the right to a fair trial in the RA. 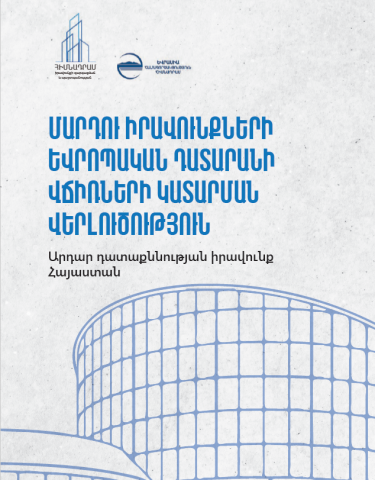