In 2009, EPF analyzed the prevalent needs in Armenia, as well as its strategies and capacities in the country. The new strategy adopted by EPF paid significant attention to European Union (EU)-Armenia relations and the Eastern Partnership program. This focus was determined by the understanding that approximation to EU standards is one of the most explicit geopolitical opportunities for Armenia to resolve major issues related to the well-being of its society, including development, evolution of democracy, security, and human capital. Therefore, as a part of its Europe program, EPF engaged, in a limited way, in the issues of higher education reform in light of the Bologna process. 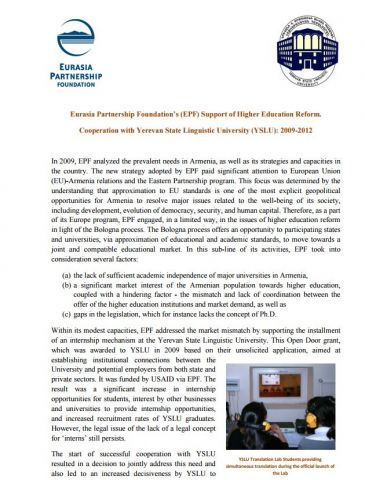