In 2009, EPF analyzed the prevalent needs in Armenia, as well as its strategies and capacities in the country. The new strategy adopted by EPF paid significant attention to the European Union (EU)-Armenia relations and the Eastern Partnership program. This focus was determined by the understanding that approximation to EU standards is one of the most explicit geopolitical opportunities for Armenia to resolve major issues related to the well-being of its society, including development, evolution of democracy, security, and human capital. Therefore, as a part of its Europe program, EPF engaged, in a limited way, in the issues of higher education reform in light of the Bologna process. The Bologna process offers an opportunity to participating states and universities, via approximation of educational and academic standards, to move towards a joint and compatible educational market. In this sub-line of its activities, EPF took into consideration several factors:

(a) the lack of sufficient academic independence of major universities in Armenia,

(b) a significant market interest of the Armenian population towards higher education, coupled with a hindering factor – the mismatch and lack of coordination between the offer of the higher education institutions and market demand, as well as

(c) gaps in the legislation, which for instance lacks the concept of Ph.D.

Within its modest capacities, EPF addressed the market mismatch by supporting the installment of an internship mechanism at the Yerevan State Linguistic University. This Open Door grant, which was awarded to YSLU in 2009 based on their unsolicited application, aimed at establishing institutional connections between the University and potential employers from both state and private sectors. It was funded by USAID via EPF. The result was a significant increase in internship opportunities for students, interest by other businesses and universities to provide internship opportunities, and increased recruitment rates of YSLU graduates. However, the legal issue of the lack of a legal concept for ‘interns’ still persists.

The start of successful cooperation with YSLU resulted in a decision to jointly address this need and also led to an increased decisiveness by YSLU to implement internal reform, based on enhancing the quality of education, its modernization, an increase in academic independence, and management reform. EPF and YSLU signed a Memorandum of Cooperation in 2010. The selection of YSLU as a strategic partner was based on several considerations and was done after thorough research and attempts to develop strategic relationships with other higher education institutions as well. The determining factors for the final choice of YSLU as a strategic partner included:

(a) the successful implementation of the first Open Door unsolicited project regarding interns;

(b) the ratio between the medium size of the university (which made the possibility of the reform likely) and its reputation for leadership, international recognition and renown (which gave a chance for the reform, if successful, to be sustained and replicable);

(c) anecdotal evidence that suggested an absence of widespread petty corruption in the University; and

Understanding that its modest capacities would not allow addressing a large sector of higher education, EPF took a strategic decision to support some of the reform elements of YSLU which could then be replicated by other universities in the same sector.

In 2010, EPF and YSLU co-organized two strategic retreats in the form of organizational activity- and game-based seminars that were aimed at the identification of major challenges and opportunities for Armenian universities, particularly those specializing in the fields of humanities, and the development of a strategy and action plan for reform. The two events significantly supported the finalization of the YSLU 2010-2015 Development Strategy as well as improved the understanding of the reform process among the university staff, students, and beneficiaries beyond the walls of the University. Moreover, the format of retreats was adopted by YSLU as a blueprint for its annual staff retreats and, in 2011, the University organized the next one independently. The first two retreats were funded by USAID.

In the three year period between 2010 and 2012, YSLU embarked on even bolder reform with the support of EPF and other organizations. YSLU implemented a number of projects and activities that became important components of the University reform process. As a part of that process, for instance, YSLU established the European Studies Center, Chair of Oriental languages and a Translation Lab. The latter was established with the financial support of SIDA via EPF. The Career Center and the Quality Assurance Center of the University were redesigned, the Science Department strengthened. Changes also took place in the management system.
In December 2011, EPF organized a series of workshops at YSLU aimed at designing the new IT system of the University that would allow uniting 6 separate internal networks and avoid duplication of work and decrease technical problems while working with University data.

In the spheres of quality assurance and career development, YSLU developed a new monitoring and evaluation plan for the educational process, conducted market research and an analysis of the labor market demand, establishing contact with potential employers and securing internship placements in the private and public sectors.

In the sphere of curriculum reform, YSLU redesigned the curriculum of the translation studies program based on the new technical opportunities provided by the Translation Lab.

To enhance the quality and image of academic scholarship in the field of humanities, YSLU established a trilingual (Armenian, English, Russian) academic periodical called Language, Society, Communication, which is a unique and ambitious attempt to establish an international quality peer-reviewed periodical academic publication with an international editorial board in Armenia in the sphere of humanities.

In 2011, EPF supported a research on plagiarism in higher education, implemented by Khachmeruk Debate Club NGO via the SIDA-sponsored Open Door grant scheme. The research demonstrated that both students and university teachers lack a basic understanding of academic plagiarism, that plagiarism is rampant, and the roots of the problem stem from the secondary education system. The results of the research were presented at YSLU and had an impact on its quality assurance building strategies.

On April 25, 2012, EPF organized an Article 27 TV talk show on plagiarism in higher education with YSLU, where this issue was discussed by experts addressing the general public. The talk show had around 16,000 viewers. You can find and watch the talk show Article 27. Armenia-EU Relations from June1, 2011 and Article 27. Educational Reforms in Armenia from April 25, 2012.

Currently, EPF is finalizing a study of higher education management legislation, which will be presented to the public in July 2012.

The reform process at YSLU was not flawless – change requires will and determination, and sometimes tough decisions. It was expected that a systematic change in practices, functions, and structures would result in mutual linkage and the sustainability of progress, that quantity of change would result in quality and make the process of change irreversible.

As an interim conclusion to this period’s work, one can say that EPF’s strategy of supporting higher education reform, focusing on a joint work with YSLU, has delivered significant outputs despite the modest means which EPF had under its disposal. EPF expresses hope that these results will be capitalized upon in the future, and its readiness to continue working on higher education reform will persist – provided that there will be means and partnerships available- and there will be a desire to embark on bold, substantial and deep reform in the current decision-making climate of Armenia, rather than restrict oneself to superficial actions.

EPF expresses its sincere gratitude to the sponsors which helped it to cooperate with YSLU, namely USAID, SIDA, and the UK Government. It also expresses its particular personal thanks to Professor Suren Zolyan, who supported this three-year-long cooperation in his position as YSLU Rector. 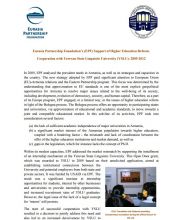 Eurasia Partnership Foundation’s Support of Higher Education Reform
In 2009, EPF analyzed the prevalent needs in Armenia, as well as its strategies and capacities in the country. The new strategy adopted by EPF paid…