The goal of the project was to contribute to accurate and unbiased reporting of the bilateral relationship between Armenia and Azerbaijan and the Nagorno-Karabakh conflict, especially in online media and blogosphere. In addition, the project aimed is to establish a cooperative network of citizen journalists, bloggers and other media professionals from Armenia and Azerbaijan.

A network of Armenian and Azerbaijani bloggers and journalists

The project significantly contributed to the promotion of dialogue blogging and dialogue-oriented online journalism between the two countries, as it developed new and supported already existing on-line platforms for dialogue-oriented journalists and bloggers, such as Neutral Zone blog, a series of articles on Azerbaijanis in Armenia and Armenians in Azerbaijan, which can be viewed on www.medialab.am and www.contact.az, and other websites. Prior to this project, very few individual bloggers were trying to establish links with each other across the Armenia-Azerbaijan border or, at least, their efforts were rather sporadic. Currently, as a result of diverse and coordinated activities, a cross-border cooperation platform now exists on Facebook, Twitter, and other social networks.

Armenians in Azerbaijan and Azerbaijanis in Armenia

Two well-known journalists from Armenia and Azerbaijan who used to work with each other before, Marianna Grigoryan and Zarema Velikhanova produced about 10 articles on Armenians who are still living in Azerbaijan and Azerbaijanis living in Armenia.

Whether in conflict, in peace, or in the current state of ‘no peace, no war’, women’s voices on both sides of the Armenia-Azerbaijan border are rarely heard in mainstream discourse. Women often feel like they don’t have a voice whether it be in their personal and family lives, in their community, or in the affairs of their country. Furthermore, it is important for women to hear other women’s stories. This lets them know that they are not alone and that those on the other side of the conflict also have their stories, often quite similar to their own. In our joint Armenia-Azerbaijan project, we wanted to create an opportunity for women from both countries to tell their stories and hear the stories of other women (notably from the other side of the border).

During the project’s implementation, two teams of journalists, writers and bloggers in both Armenia and Azerbaijan interviewed women of different ages and backgrounds, both in the capitals of Yerevan and Baku and in the regions. We asked them about their lives, their hopes and wishes for themselves, their families and their countries. These interviews were transcribed, edited and accessible in three languages: Armenian, Azeri and English.

Women narratives from Armenia and Azerbaijan

The electronic book is about two heroes (an Armenian and an Azerbaijani) whose story brings them closer to understanding and appreciating each other’s cultures; points of reference will be developed and posted online. The chapters are expected to generate feedback from readers who are able to use the Internet. The project was implemented in cooperation with the Imagine Center for Conflict Transformation.

To contribute to accurate and objective reporting of the bilateral relationship between Armenians and Azerbaijanis through increased stakeholder awareness of existing bias in traditional and on-line media coverage of Armenia-Azerbaijan relations. The Yerevan Press Club (Armenia) and Yeni Nesil (Azerbaijan) accomplished a baseline assessment of the bias in Internet-based media in Azerbaijan and Armenia, and produced a media bias glossary. The media assessment and the glossary are two major components of the ‘Unbiased e-Media Coverage of Armenia-Azerbaijan Relations’ project jointly implemented by EPF Armenia and EPF Azerbaijan under funding from the UK FCO.

The report covering the monitoring results is available here

www.WAR Documentary was produced by Internews in Armenia and Azerbaijan describing the existing e-media bias in covering Arm-Az relations and its negative effects.

Four TV talk shows aired in Yerevan and six regions of Armenia in March-June 2011, which featured the project and the key Armenian participants, which made it possible for EPF to present the online peace discourse to the wider public. Visual products of the two stages of the project, which included the film “Passenger” and the four cartoons were aired and discussed, for which the project participants invited as guest speakers. The average viewership of EPF’s TV talk shows on Yerkir Media TV is about 3,000 per talk show. 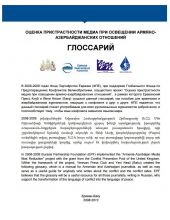 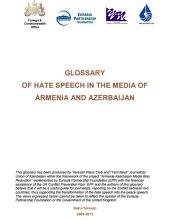