In 2008-2009 Eurasia Partnership Foundation (EPF) implemented the “Armenia-Azerbaijan Media Bias Reduction” project with the grant from the Conflict Prevention Pool of the United Kingdom. Within the framework of the project, Yerevan Press Club and Yeni Nesil (Baku) created the following glossary, which is a manual for Armenian and Azerbaijani journalists, as well as may serve as a useful guide for anybody who writes about the conflict and the conflict sides. EPF believes that the glossary will be a useful resource for all those journalists, writing in Russian, who support the transformation of the language of conflict into the language of peace. 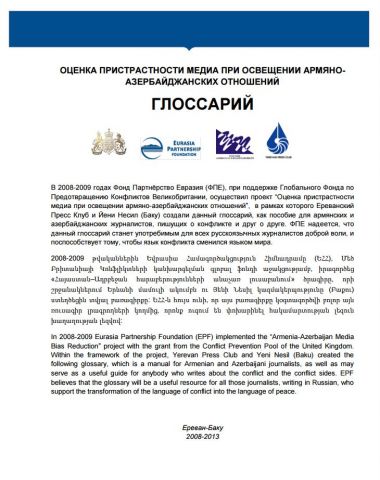