The project goal was to support Armenia-Turkey rapprochement through the development of new business partnerships and regional professional networks, engagement of civil society in alliance-building to further contribute to Armenia-Turkey normalization, and the establishment of a favorable environment for state-to-state dialogue and interaction.

Armenia and Turkey are burdened by a long history of painful disagreement. The two countries have made a series of attempts over the last twenty years to set aside their differences and establish ties, but thus far these efforts have not resulted in diplomatic relations being established. There have been at least three major “waves” of dialogue with Turkey since Armenia’s independence. While all these “waves” had limited success in fostering political rapprochement, a lesson learned from the “third wave” was that the combined efforts of governments, civil society, and the international community can affect public attitudes in a positive way.

With that in mind, the project supported a “fourth wave” of rapprochement by leading civil society, business and informal state-level dialogue to a point where Armenia and Turkey will be able to establish relations and open the border with ease. The project was implemented by EPF in a consortium with three Armenian partners: Yerevan Press Club (YPC), International Center for Human Development (ICHD), and Union of Manufacturers and Businesspeople of Armenia (UMBA). These four organizations have been in the forefront of the Armenia-Turkey rapprochement process for many years and have played a major role in civil society, media, cultural dialogue, and track two and people’s diplomacy efforts between Armenia and Turkey. The consortium also has strong partnerships with leading organizations in Turkey.

The project activities focused on three priority areas: business partnerships, civil society, and inter-governmental dialogue. The program aimed to support all three areas with research. The term of the project was from October 1, 2010 to October 1, 2012. The project aimed to contribute to the formation of cross-border networks, increase confidence and decrease stereotypes among the two societies, create conditions for state actors to develop informal relations, and, in the long term, help to address more controversial issues.

USAID and the Consortium Members supported Armenia-Turkey rapprochement by facilitating engagement between civil society groups, establishment and development of business partnerships and regional professional networks, and enhanced understanding between the people, for peace and economic integration in the region.

Please download the report from the plenary session below.

The Turkish Economic and Social Studies Foundation (TESEV) organized a half-day coordination meeting on June 26, 2012 at the Swedish Consulate in Istanbul. The event brought together 25 stakeholders from Turkey including the main Turkish partners of the SATR project, civil society actors who were involved in the rapprochement process between Armenia and Turkey, donor organizations and members of the media. The purpose of the meeting was to discuss the current stage of Armenia-Turkey projects, their achievements and failures, possible future projects and ways to increase the efficacy of such activities. The working language was Turkish and the event was followed by a networking reception.

Initially, each participant described their specific experience with Armenia-Turkey projects as well as the content of their activities. The event was then devoted to open discussion, where participants floated ideas for future projects and collaboration, problems and difficulties associated with current projects as well as issues that need to be tackled in order to increase the impact and efficacy of the ongoing/future projects.

"Getting to Yes" Research paper

In April 2011, EPF began researching ideas that could bring about a small- or mid-scale change and could be implemented even in the absence of diplomatic relations. Over the whole month of April 2011, the researcher Sven Behrendt conducted interviews with key stakeholders in Yerevan, Armenia and Istanbul, Turkey. The researcher presented the preliminary results of the research at the Policy and Media Discussions in Yerevan on May 16-18, 2011.

The research was completed in June 2011, with the research findings being presented to major stakeholders in Armenia and Turkey. Some of the key recommendations that the researcher came to include the following: a) acknowledge geopolitical imbalances between Turkey and Armenia and innovatively develop the instruments that enable dialogue beyond these imbalances; b) deepen and widen the dialogue: begin to move it beyond Istanbul and Yerevan and develop outreach strategies in particular to engage younger generations; c) acknowledge societal fragmentations and internal political conflict within Turkey and Armenia: do not exploit these for tactical gain, but use them to develop a more differentiated perspective of the dialogue partner; d) develop a notion for the economic opportunity costs of closed borders and wherever possible create business linkages between communities.

Getting to Yes (English)

Getting to Yes (Turkish) 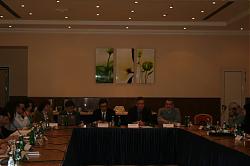 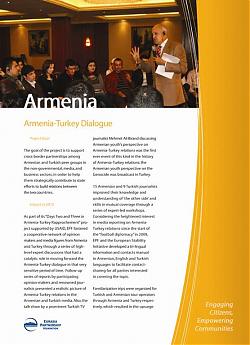 Please download One-pager on Armenia-Turkey program which is a part of EPF’s 2010 Annual Report. 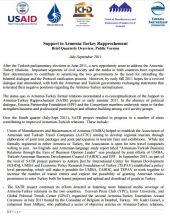 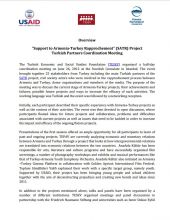 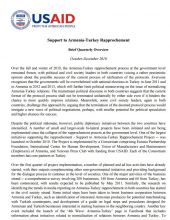 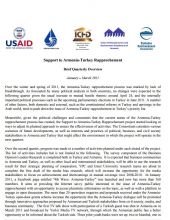 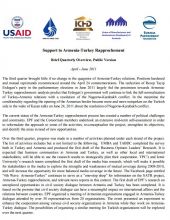 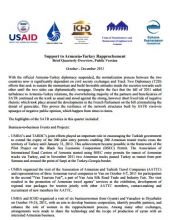 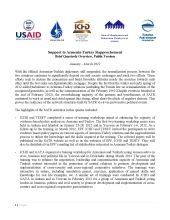 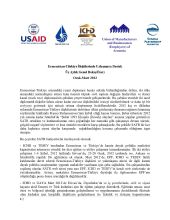 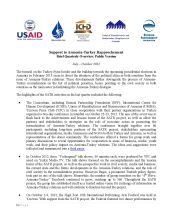 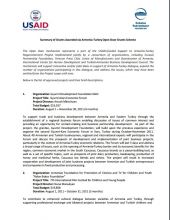 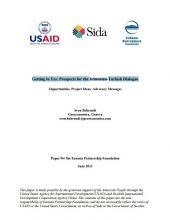 Getting to Yes: Prospects for the Armenian-Turkish Dialogue
This paper seeks to develop ideas and input to generate a sense for new opportunities, project initiatives and advocacy messages capable of…