Eurasia Partnership Foundation with support of the Embassy of the Kingdom of the Netherlands implemented Promoting Religious Tolerance in Armenia project. The project launched in 2012 and ended in June 2013. The goal of the project was to promote religious tolerance in Armenia by improving public attitudes toward different religions through research and pluralistic public discussion of religion via media.

Major Components of the Project.

In order to compare religious intolerance in mainstream and alternative media sources, including TV channels, newspapers, and on-line media EPF commissioned a qualitative media research. The research has been conducted by Yerevan Press Club (YPC) in 2012, and studied reflection of public stereotypes in the media. The research consists of three parts – a.) study of international conventions and other relevant documents, as well as the articles on national legislation guaranteeing freedom of conscience; b.) summary of previously conducted studies on intolerance; c.) analysis of the monitoring done by the Yerevan Press Club as a part of the current study.

The volume of studied media material includes 1,020 pieces that touch on religious issues in one way or another, but only 96 of them (less than 10%) contained value-based convictions and stereotypes towards religions, religious denominations and religious communities. On the one hand, these numbers suggest a relatively neutral position by the Armenian mass media towards religious issues as they covered these stories primarily from an informational and current affairs point of view. At the same time, a deeper analysis of the studied material shows that in the media, and consequently in the public discourse, there are attitudes which allow one to speak about “tense reactions” to the topic of religion.

In order to get the full picture of perceptions on religion in the Armenian society, EPF commissioned a qualitative research comprising two parts: theoretical and practical, to researchers/lecturers representing the Yerevan State University: Ms. Lusine Karamyan and Mr. Hovhannes Hovhannisyan. The theoretical part is the overview of the intellectual debate over the issue of religious tolerance among the modern theorists, referring to different approaches. The practical part summarizes the results of the fieldwork conducted in Yerevan and the regions of Gegharkunik, Shirak and Lori. The research methodology included 22 in-depth interviews conducted with representatives of different communities, especially religious ones. The researchers conducted 10 focus group discussions with participation of journalists, doctors, teachers, psychologists, and political and civic activists. Key informant interviews were made with 15 experts, particularly specialists in religious studies, ethnic studies and political science, as well as active politicians, representatives of state institutions (particularly those officials in judicial bodies who were well informed about the legislative changes relating to religious organizations or those who have had first-hand experience of religious tolerance issues in their professional work). The study used the results of discussions on the changes to the Law on Conscience and Religious Organizations. The researchers analyzed the laws, decrees, television programs, articles and blog entries relevant to the issue.

See the main findings of the research:

Tolerance in Armenia Today. The Perspectives of Religious Tolerance. 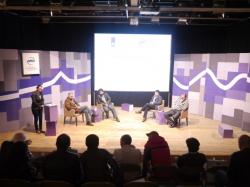 As a part of the project EPF produced and broadcast six talk shows on religious tolerance issues. You may watch the talk shows following the links below: 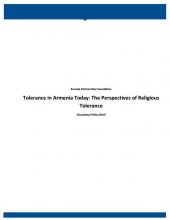 Tolerance in Armenia Today: The Perspectives of…
The study consists of two parts – theoretical and practical. The theoretical part makes use of the approaches to tolerance, particularly religious…