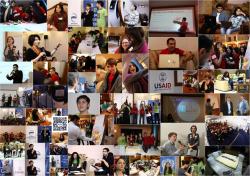 “Mardamej” is the transliteration of the Armenian word “Մարդամեջ”, which has multiple connotations including a “forum” location in rural areas, a public venue for social networking, a social gathering.

EPF has initiated a wide campaign to engage participants from the region and reached as many as 240 people through 14 outreach meetings.

As a result of an intense outreach campaign, 66 project applications and 66 participation applications were submitted by the end of the indicated deadline.

Based on the level of innovation, technological feasibility and cost-efficiency, the following six project ideas were identified by a renowned jury among the 70 submissions from 66 applicants, to be elaborated during the Camp:
• “To Do or Not to Do”, Aram Tovmasyan: Election promise tracking platform
• “Pop Clinic”, Ani Davtyan: Monitoring of service provision and patient feedback in primary healthcare institutions
• “Tagh Info”, Gayane Mirzoyan: Hyperlocal community news
• “My Transport.am”, Lilit Manukyan: Public transport schedule
• “ILike”, Samvel Martirosyan: Social networking over “The 1000 and 1 things”
• “Wish2Real”, Stepan Smbatyan: Linking the need for social support with philanthropic resources

After two days of deliberation, “My Transport.am” was ultimately selected and received 4,000 USD in grant funds from UNDP Armenia and a free internet connection for two years and hosting from UCom. “ILike” won the public vote.

EPF has provided additional support to four of SIC projects which have been successfully operating so far. Hyperlocal community news has started the pilot phase through its Facebook page and is currently finalizing the website. Wish2Real is available at wish2real.com and its Facebook page. Pop Clinic operates at popclinic.org and on itsFacebook page.

"Mardamej" Social Innovation Camp Armenia
The Mardamej (“Mardamej” is the transliteration of the Armenian word “Մարդամեջ”, which has multiple connotations including a “forum” location in…