Eurasia Foundation Armenia Representation launched a Resource Centers for Community Development program in 2005 which was completed by its legacy Eurasia Partnership Foundation in 2009. According to the independent program audit conducted in 2009, RCCD Program has had a significant influence on institutional development of the implementing NGOs. Within the ARM program EPF has committed to create telecommunication hubs in the region on the basis of the RCCDs. As part of the program ARM team has also visited Armavir and Syunik regions and met more than 30 organizations to map the situation before the Telecenter project launch. The visits showed that existing RCCDs had more capacity to serve as telecommunication hubs than any other NGO in the communities. EPF has identified 5 sustainable resource center projects among the list of the 9. Armavir Development Center, Goris Youth Union, Martuni Women’s Center, NGO Center Vanadzor and Sakharov Human Rights NGO Gyumri were selected as target telecenter sites. The selection was based on the sustainability potential and past experience with the sites.

Internet access is penetrating the regions at a rapid pace, not least thanks to the mobile operators and availability of 3G internet. Having the means accessible to them, people – particularly young people in the regions – need to learn the ABCs of new media, to become learned users. Lack of knowledge of new media in the modern world is equivalent to a lack of linguistic literacy in the pre-modern era – without these skills, the population of Armenia will not be able to develop and compete in these times. This is also realized by the government, which puts significant efforts into spreading internet access, by distributing computers to schools, for example. But the state is poor, it cannot reach the entire community, and the ARM project comes to its aid.

In order to build a base for spreading new media technologies, EPF is supporting telecommunication centers on the premises of five developed NGOs in Armavir, Gegharkunik, Lori, Shirak and Syunik regions. The sixth center was established in Ijevan, Tavush region as part of EPFs Northern Branch in July 2013. EPF calls its centers InfoTuns (information homes) and strives to create not just regular resource units but cozy family homes in each community. Until the end of 2011, the InfoTuns served as traditional resource centers with the additional service of information dissemination in their portfolio.

With support from EPF, InfoTuns are becoming regional telecommunication hubs in the regions with a large portfolio of services.

EPF has designed a series of mandatory and optional trainings for the InfoTuns. The mandatory (“Flagship”) trainings are identical across the regions. They aim at providing basic media literacy skills to the community in order to influence the consumer side of the information industry.

a) Monthly practical workshops on blogging and social network navigation for a group of 20-25 people in each InfoTun;

b) Monthly film screening and debate events in each InfoTun;

EPF also works towards content creation by identifying and training a core capacity of bloggers. Citizen journalists trained in the InfoTuns are re-published in the most popular traditional media outlets today and constitute a core capacity of civic participation in each region.

InfoTuns are run by young leaders identified through the YouthBank network of EPF. Each of them has passed a TOT training on new media tools and passes the skills to local constituencies through regular training and mentorship sessions.

Through seed support from EPF, InfoTuns were able to renovate and equip state-of-the-art training labs receiving more than 500 people annually. 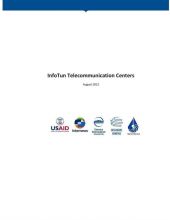