The research is oriented at assisting Armenian civil society organizations but it can also be useful for the Armenian government and international organizations which may assist local organizations in strengthening their capacities and the preparation of alternative reports.

The report focuses on a relatively new topic which has not been examined in Armenia before. There are some reports and other documents analyzing the work of United Nations (UN) treaty bodies and the Universal Periodic Review (UPR) from the point of view of, for example, particular rights and freedoms. However, there are no studies which contain up-to-date information on the participation of Armenian CSOs in international human rights mechanisms and particularly in preparing alternative reports to UN treaty bodies and the UPR.

The report provides an overview of awareness and the obstacles of CSOs interested in alternative reporting, which can be essential for UN treaty bodies for future policy guidelines and recommendations for working with Armenian government and CSOs for developing quality alternative reports and UPRs. 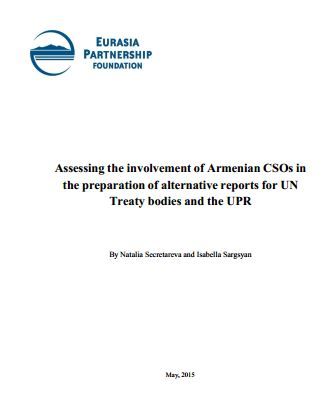