The PeaCE program that EPF-Armenia, EPF-Azerbaijan, CRRC-Georgia and International Alert are engaged in, funded by EU, has several aims, and some of them are to demonstrate to the Armenian and Azerbaijani societies that joint projects among the civil society members are possible; challenge stereotypes; recruit ‘new faces’ and therefore expand the ranks of ‘usual suspects’, who have been engaged in such projects for many years, but recently have become quite pessimistic of their worth. This program aims at moving at least some members of the societies to discuss difficult issues, between themselves as well as inside their societies; and overcoming the taboos that are being imposed by the daily official and social propaganda, which usually promote exclusively the war and conflict discourses. Many of the projects of numerous partners of EPFs within PeaCE are still in the making, but some of them have already come to fruition. 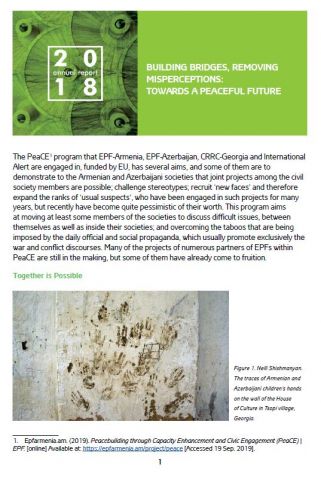