The mission to form “the strategic who-s”: EPF as media and a next generation media model

In 2010, when EPF began its first large media program, in partnership with the Media Initiatives Center (MIC, then called Internews Armenia) and funding from USAID, professor Davit Hovhannisyan led a creative game where one of the groups was called “I am a newspaper”. Many years have gone by since then, but this thinking continues, reflected by the slogan “People are media” used by the very important resource media.am created by MIC. This is not just the continuation of Marshall McLuhan’s thinking, it is also an admission of the fact that the information-internet revolution in the world is irreversible, and this is the most important event in human development since Gutenberg’s invention of the printing press. 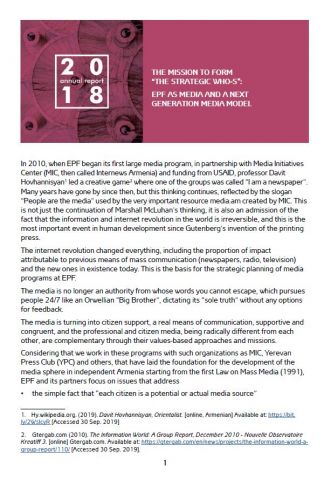