This alternative report has been developed through the joint efforts of the Eurasia Partnership Foundation (EPF), the Human Rights Research Center, the “Sinjar” Yezidi National Union and the Armavir Development Center as part of the EU-funded Promoting Human and Labor Rights through GSP+ program implemented by the Eurasia Partnership Foundation (EPF) with the support of Democracy Reporting International.

The report looks generally at Armenia’s legal and policy framework through the lens of the Convention on the Rights of the Child (CRC) and focuses on the rights of children in the Yezidi community. With a population of over 35,000 persons, Yezidis are the largest ethnoreligious minority group in a country where over 98% of the population identifies as Armenian. According to the most recent census in 2011, there are 16,480 individuals belonging to national minorities (Yezidi, Russian, Assyrian, Greek, Ukrainian, Kurd, Georgian) under the age of 19; 12,214 of them were from the Yezidi community.

This is the first alternative report focusing on the rights of children from ethnic and religious minorities in Armenia. While these children face the same challenges and experience the same violations as those from majority communities, they also experience specific issues which have so far been largely excluded from general reports on children’s rights produced by state bodies, international organizations and local CSOs. This alternative report focuses only on issues affecting minority children and does not consider those relevant to all children in Armenia, regardless of their religious and/or ethnic identity (e.g. child poverty).

The report analyses the legal and regulatory framework relevant to children’s rights in general and minority rights in particular. It also includes the results of a media monitoring exercise and six focus groups conducted in the Armavir region where many Yezidis live.

The various violations of the rights of children from religious and ethnic minorities in Armenia are interconnected and thus relevant to several CRC articles simultaneously. For instance, the dropout of girls from schools clearly implicates the right to education under Article 28. However, the cause of this issue is likely rooted in the harmful practice of early marriage, which falls under a number of other articles. In the same manner, a number of issues pertaining to Article 14 on freedom of thought, conscience, and religion are also relevant to Articles 12 and 13 on freedom of expression and the right to be heard. Taking this into account, the report focuses on four key articles: Articles 4 on state obligations; 14 on freedom of thought, conscience and religion; 19 on freedom from mistreatment; and 28 on the right to education. The combination of these reflects a range of interconnected issues, challenges and gaps that contribute to the exclusion and rights violations of children from Armenia’s ethnic and religious minorities. 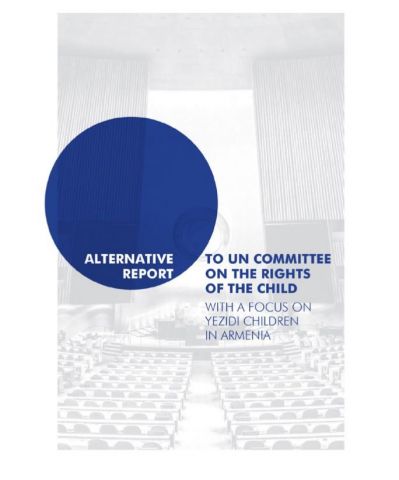