The goal of the program was to contribute to the advancement of democracy, promotion of European values and human rights, establishment of freedom of media and speech, as well as to the promotion of confidence-building between Armenia and the neighboring countries through innovative projects.

The Open Door mechanism represented a part of the Strategic Partnership between Eurasia Partnership Foundation (EPF) and Swedish International Development Agency (SIDA). Within the framework of this partnership SIDA provided general operating and program support to EPF in Armenia.

By February 1, 2011 Eurasia Partnership Foundation had received 43 inquiries. 14 of them had been shortlisted. During the Committee meeting on 23 March, 2011, 11 inquiries had been approved for funding. Below were the approved projects in brief.

1. Center of protection of drivers’ rights “Achilles” NGO: Elaboration of an innovative method of accident expertise

This project aimed at contributing to the reduced corruption in the road traffic accident investigation through introduction of a high-tech independent expertise on traffic accidents, through the purchase and operation of a 3D collision and trajectory simulation tool that enables quick and accurate analysis of a wide variety of motor vehicle collisions and other incidents. The project would create an alternative to the official Traffic Police expertise, which would reduce corruption risks related to investigation and litigation of traffic accidents.

2. Journalists for Human Rights NGO. Civic monitoring in the Army, in regard of investigation of Human rights’ violations

This project would contribute to the protection of human rights in Armenia through increasing public awareness and public control over human rights violations in the Armenian military, through the establishment of a professional network of human rights journalists located in different regions of Armenia The project would result significant grow of the number and quality of investigative reporting on human rights violations in the military, which, in turn, would increase public awareness of the situation in the military, and, eventually, would strengthen the public leverage over the situation.

This project would contribute to the social integration of the disabled through the elaboration and promotion of an occupational therapy model in Armenia. The grantee would set up a model social enterprise to produce ceramics and would carry out an active marketing campaign to promote and sold its products through direct sales, fairs, and web-stores. As part of the project the grantee would conduct particular types of sport training and sport events to promote sports among disabled people.

This project would contribute to the transparency and accountability of the Armenian state institutions in the security area through bringing the American and Russian security and defence traditions in Armenia. The organization of a large-scale conference with involvement of local stakeholders (including decision-makers and leading specialists from the field of security and political studies) and international experts from USA, EU, and Russia and the further work on developing a trilingual (Armenian-Russian-English) terminological dictionary on Strategic and Security terms and concepts as reflected in the American and Russian defence and security traditions will result in the extrapolation of the American and Russian security traditions into the Armenian realities, as well as would further promote the democratization and transparency of the Armenian defence and security structures.

This project would contribute to the development of critical thinking and critical writing in Armenia through encouraging constructive public discussion on issues of cultural and social importance at the newly established web-site that would feature significant cultural events and developments in Armenia, and would invite critical comments from the readers. This would create an interactive cultural platform, and would encourage information exchange and critical dialogue among culturally and socially active communities in Armenia.

This research would study the manifestation of freedom within the Soviet Armenian society in 1960-70ss including the ways of resistance for the freedom and subcultures typical to that period (“stylyags”. “hippies” etc.) and discussing them in the context of the problems and their solutions typical to modern Armenia.

9. ADX Ltd. Articles on innovation and modernization in Armenia on the website www.prm.am.

This project would increase public awareness of global and local trends in modernization and innovation through production and dissemination of alternative information on culturally, politically, and socially significant developments in Armenia and in the world. It aimed at establishing a unique virtual space for public discussions on social, political, and cultural issues in light of modernization and innovation, which would further encourage freedom of expression in Armenia.

This project would contribute to strengthening the culture of social responsibility of the society through increased media exposure of the socially disadvantaged and marginalized households and the introduction of innovative tools for individual and corporate assistance to the poor. With the establishment of a journalists’ and bloggers’ network who would identify and follow-up the marginalized households throughout the country the project would set up an effective and sustainable mechanism of support to the most disadvantaged households in Armenia, as well as would increase the visibility of and a public dialogue on the issue of extreme poverty in the country.

This project would contribute to the development of tourism in the town of Martuni and the neighboring communities through the promotion of culturally significant artifacts, traditions, and crafts from that region as well as a number of identified suitable houses for B&B services to visiting tourists among Armenian tour operators. As a result of the project, three tour packages covering the Martuni region would be elaborated and offered to representatives of incoming tour industry in Armenia.

This project would contribute to the peaceful resolution of regional conflicts by increasing awareness of the Armenia-Turkey dialogue process among expert communities, media, and general public throughout the South Caucasus. The Georgian, Abkhaz, and South Ossetian journalistic team’s joint investigation of the Armenian-Turkish dialogue process would familiarize the South Caucasian societies with the complicated process of the Armenian-Turkish dialogue, which would help the communities to apply the lessons learnt from the Armenia-Turkey process to their local conflicts. 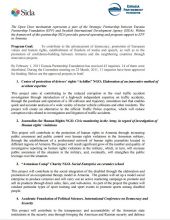 SIDA Open Door Grants 2010-2012
The goal of the program was to contribute to the advancement of democracy, promotion of European values and human rights, establishment of freedom of…