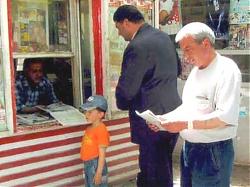 Since 1991, newspaper readership and the number of newspapers printed in Armenia has decreased year after year. This decline is due in large part to a lack of available options for distribution. Two large companies, Haymamul and Haypost, have maintained a monopoly on newspaper distribution since Soviet times. These companies give priority to three national newspapers, depriving the market of other papers.

When Eurasia Foundation embarked on its Print Media Distribution program in 2004, one of its biggest goals was to create an alternative to the existing monopoly on newspaper distribution. The program, implemented in partnership with the Open Society Institute, offers a viable and competitive model for expanding distribution throughout the country, as well as increasing newspaper subscriptions and sales. 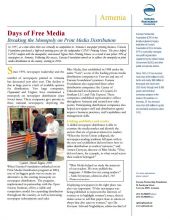 EPF’s Media Distribution Projects
In this document, you can find information on EPF's previous support to print media with a goal to help breaking monopoly in print media…