EPF has developed specific formats aimed at boosting the creative potential of young people in Armenia in addressing issues of common interest or concern. This format was branded as Mardamej Social Innovation Camp (SIC) which was first held in 2014 and has been organized consecutively in the past 8 years with involvement of around 650 young people from all regions of Armenia.

After the development of evaluation methodology and the tool for performance indexation of Community Council members, the pilot version of the game was launched in Martuni community. The call for participation was announced among the community members and as a result around 30 participants, mainly high school students, applied to take part in the game.

The impact of this project can be measured in several dimensions: increased competition within the Community Council of Martuni, enhanced knowledge about LG system, participatory democracy and citizens’ rights among the young people, as well as addressing several important community issues, such as upgrade of the community website, improved communication between Council members and public. The project had spillover effects on city planning as well: renovation of street signs, planning of the city park redesign, successful advocacy to establish a bike lane, and erect a bicycle statue to promote healthy lifestyle in the city, as well as tree planting in different parts of the city with involvement of volunteers and LG staff representatives.

Another successful project from Mardamej 2017 is called “Mala Ma” which means Our Home in Yezidi language. The aim of the project was to create an opportunity for Yezidi teenage girls to continue their education and career development, which is a significant problem due to the stereotypes that exist in the Yezidi community connected with the early marriage tradition.

To address this issue the project team identified successful cases of Yezidi women in Armenia who were determined to receive higher education and achieved career goals. These success stories were shared both with the girls and their parents. It should also be mentioned that “Mala Ma” has inspired school teachers in Armavir and Ararat regions where the project was taking place. Involvement of the teachers in the trainings became an additional guarantee for parents to allow their daughters to participate.

Lost and Found Armenia was a project supported by EPF in 2018 aimed at addressing the issue of abandoned or disappearing villages of Armenia through reintroducing their touristic potential to the general public mainly through social media. To reach this goal the project team has visited several such villages and developed audiovisual and textual materials introducing the nature, historical monuments and the people living in these communities.

Overall, the project team visited around 20 villages in Syunik, Vayots Dzor and Armavir regions and created various video and photo materials, articles that were afterwards placed on the Facebook page of the project. The locations of these hidden areas were also placed on the Google Map with all the necessary descriptions to make it easier for tourists to navigate, since the majority of these villages are situated in mountainous areas.

A particular work of Ijevan Street Art team addressing the issue of sex-selective abortions in Armenia, became extremely popular in Armenia which was noticed by a number of celebrities and coined as “Armenian Banksy”. In their turn, Usta Khtsan Team Members decided to use works of contemporary Armenian artist and photographer Areg Balayan and place artworks in Lori, Ararat and Gegharkunik regions of Armenia.

Introducing "Khaghaget", a collection of games for children (in Armenian)
END_OF_DOCUMENT_TOKEN_TO_BE_REPLACED 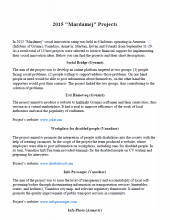