To contribute to the development of alternative media and alternative content through the establishment of an on-line platform featuring high-end cultural information. The grantee will select 14 classical Armenian films and produce an analytical program around each of them. Grantee’s WebTV will broadcast two analytical programs each month, which will be followed by a facilitated on-line discussion on the project’s video-blog, as well as via other web-based social networks. The materials and discussions will be disseminated wider in the regions through public watching in EPF’s tele-center hubs.

Anna Muradyan ‘s project aims at decreasing school violence and teenage aggression through encouraging citizen reporting and web social networking in targeted schools of Etchmiadzin and Yerevan. Anna will work with school-age children in secondary schools to teach them basic blogging and I-reporting techniques. She will engage an expert juvenile psychologyst to encourage school students to report on misconduct of teachers, shortcomings in the teaching process or inter-student violence.

To contribute to the development of alternative media in Armavir region of Armenia through engaging young people in civic activism and blogging. The grantee will establish a youth-led Social Blog, and will train 100 young people in blogging and new media tools. The trained youth will post citizen journalism materials in a newly created Social Blog. At the end of the project a Bar Camp will be organized to highlight the results of blogging initiatives and to engage more young people in civic activism. The Bar Camp video-report will be broadcasted through local TV channels and posted on the web. 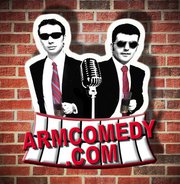 ArmComedy proposes to raise public awareness on political, social and environmental problems, providing regular satirical coverage of news. The coverage will spotlight local political and social developments. ArmComedy’s “Embarrassing Bad Governance” project will illustrate governance of public officials showing inconsistencies of political performance and general social drawbacks with a focus on pre-election behavior of political parties. The project will be implemented through generating satirical articles, shooting PSAs and video sketches and conducting a closing stand-up comedy show at the end of the project.

To contribute to the development of alternative media and new ways of information dissemination through promotion of citizen journalism and Internet broadcasting. A1+ will facilitate public access to the A1+ web-site, create and disseminate instructions and educational films targeting non-professional journalists, as well as will encourage “I-report” media content creation and dissemination by newly engaged citizen journalists. The grantee will also enable live transmissions by A1+ journalists, making the A1+ Internet broadcasting more efficient and interactive.

To contribute to the development of new media and social networking through IT advancement and information diversification among school-age youth in Berd region of Armenia. The grantee will conduct a series of training for secondary school teachers and students on social networks and new media tools. Following the trainings, a facilitated blog platform will be created to host materials on educational policy regulations, training opportunities, and best practices related to secondary education. The grantee will bring together partners and experts from both Berd region and wider Armenia to the first ever Bar Camp event in the region.

To contribute to the development of new ways of information dissemination and social networking through the establishment of a network of I-reporters in disadvantaged ecological areas of Armenia.

EcoLur Informational NGO will conduct a series of training in citizen journalism for civic activists in 25 communities throughout Armenia, identify activists to become liaisons in the network of I-reporters, and engage OSCE-created Aarhus Centers. The grantee will also create a “Video Ecolur” page for S.O.S video submissions and an EcoLur blog to host and disseminate materials generated in the hot spots.

To contribute to the development of alternative media and new ways of information dissemination through support to investigative journalism in Armenia. The grantee will add an online multimedia platform to its existing website (www.hetq.am), and will train 12 professional journalists from Yerevan and the regions of Armenia in operation of multimedia tools and production of multimedia content. The project will establish a network of well-trained investigative journalists throughout Armenia, improve the quality and diversity of investigative reporting on Hetq’s web-site.

To contribute to the diversification of news flow in Lori Region through creation of a mobile live broadcast capacity at Lori TV. The grantee will purchase and install a portable live broadcast equipment (Niagara Gostream SURF) enabling an instant broadcast of events from hot spots. The project will be piloted during the three month lifecycle of the grant. The project will create a rapid reporting capacity in Lori region.

To contribute to the development of alternative media and new ways of information dissemination through promotion of citizen journalism in the regions of Armenia. The grantee will create a mobile version of www.lragir.am, add a new column “Social Reporter” to the regular and mobile versions of www.lragir.am, and invite interested readers to submit content for the “Social Reporter” via internet and mobile phones. Future citizen journalists will be able to learn mobile report and video production and submission techniques on the grantee’s web-site.

To contribute to the development of new sources of information and demand for alternative media content through encouraging a public dialogue on issues of the fight against corruption in Armenia. The grantee will engage a group of three Armenian journalists in an investigation of Georgia’s successes in the fight against corruption and their correlation with the Armenian realities. Resulting print and video reports will be made publicly available via web-sites of the involved media outlets and a newly established blog. Closer to the end of the project, the grantee will conduct a public presentation and discussion of the project results.

Seda Muradyan is an individual applicant, a current Stanford Knight fellow, who proposes to create an I-Report Facebook App. The social game will be created as a result of a research conducted in Stanford. It aims at mobilizing the resources of internet users through a Facebook game and encouraging them for active social reporting. Facebook users will be invited to create “Avatar Citizen Journalists” and to compete with other users with the self-generated I-report stories. The Avatars will have spaces for accumulated stories from different social network platforms (FB, Twitter, Blogs). The App will not be a mere simulation but will recommend the authors to replicate their stories in real news media resources.

Samvel Martirosyan’s team proposes to create a Mobile Journalism Portal and to widely promote the portal through online and offline networks. The grantee proposes to create a user-friendly resource accessible not only in Yerevan but also in the Marzes. The project will be carried through a dense series of training and meetings in the regions. The team will establish partnership relations with leading traditional media resources and most active bloggers to ensure information exchange. The partnership links will also help to market the new Portal in the social networks. As a result of the project activities, the Portal will host regular unedited information flow from the regions of Armenia. It will allow for submissions via MMS, SMS, E-mail, and Twitter.

To contribute to the development of alternative media through the establishment of a new source of information on the phenomenon of Armenian migration in the 20th century. Versus Studio team will produce a documentary featuring stories of Armenian migrants of different generations throughout the world and will create a website featuring relevant official documents, personal stories, photos, and video and audio material on the issue. A section on the website will make it possible to initiate and facilitate a public discussion over the issue.