Rural communities in border regions (nine out of 10 regions of Armenia border different countries: Iran, Turkey, Azerbaijan and Georgia) are among the most remote and isolated from larger cities and towns and among the hardest hit by poverty. With their two longest international borders closed to trade, these border regions suffer from particularly high unemployment and desperate economic circumstances. With the advancing global economic crisis, large-scale businesses are affected most severely. Providing local alternatives to development, such as supporting small business development, has been the remedy for reducing the hardships of economic decline. Therefore, as in many other countries, there is a need in developing small-scale business opportunities for young people who are the main carriers of the effects of unemployment in their isolated communities.

Young people aged 16–30 comprise approximately one fourth of Armenia’s population. More than one third lives in rural areas. Young people, particularly those in rural areas, are disproportionately affected by unemployment and poverty compared to those living in the cities.

Yet people under the age of 30 remain an untapped resource in the fight against poverty and social and economic exclusion. Eurasia Partnership Foundation (EPF) believes that young people living in the regions have a crucial role to play in local economic and social developments. The current project helped young people to learn and become entrepreneurial, increase their knowledge on how to engage in economic activity, and in turn improve their self-reliance and social well-being of their communities.

Youth entrepreneurship skills development becomes an effective means for increased social and economic activity for youth people, leading to potential employment, self-employment, and income generation opportunities. To create opportunities for young people of rural areas to engage in economic and entrepreneurial activity and increase chances for income generation and employment, the EPF with support of SME DNC empowered young entrepreneurs in the regions of Armenia through:

The proposed initiative relates very closely to the mission of the Eurasia Partnership Foundation: “to empower people to effect change for social justice and economic prosperity through hands-on programs, helping them to improve their communities and their own lives,” Even further, it will use several of EPF’s successfully implemented projects, such as the YouthBank, a youth capacity building program where groups of young people develop leadership potential to increase their own and their peers’ social and economic activity. 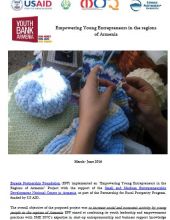