Eurasia Partnership Foundation (EPF) has been continuously supported by the UN Office of High Commissioner of Human Rights (OHCHR) to enhance the capacities of Armenian civil society and advance their work with UN human rights mechanisms. In 2014-2015, EPF assessed the involvement of Armenian CSOs in the preparation of alternative reports for UN Treaty bodies and the Universal Periodic Review (UPR). The research examined the history of alternative reporting by Armenian civil society and identified the reasons behind the Armenian CSOs’ decision-making on submitting or not submitting alternative reports. The research revealed a certain lack of awareness of the reporting process and gaps in reporting capacities among Armenian CSOs and civic activities.

To address these shortcomings EPF initiated a project that targeted human rights organizations, civic activists, and students. The project offered hands-on training on UN human rights mechanisms with a particular focus on alternative reporting and work with Special Procedures. To support the training,  EPF elaborated an Armenian-language toolkit “How to work with UN human rights bodies” that provides concise information and step-by-step guidance to Armenian CSOs, civic activists and other stakeholders on methods of using UN Human Rights Mechanisms to advance human rights work in Armenia. In particular, the toolkit covers the UN Special Procedures and illustrates the process of drafting alternative reports to the UN Treaty bodies and UPR.

To further enlarge the civil society contributors to the process of alternative reporting and nourish a new cadre of civic activists, EPF recruited students from leading Armenian universities to participate in an additional two-day training on human rights promotion and protection with a specific stress on UN Human Rights bodies and alternative reporting tools.

To establish connections between the younger generation of human rights activists and the experienced local CSOs, EPF organized a networking meeting between the two groups of beneficiaries:  students and CSO representatives.  The meeting made it possible for CSOs to meet with potential volunteers/interns who could contribute to their work. At the same time, students could learn more about the work of Armenian CSOs, and possibly start considering the civil society work as a potential career path. 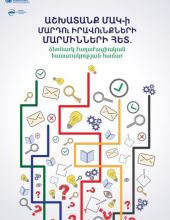 How to work with UN human rights bodies (in Armenian)
The toolkit provides concise information and step-by-step guidance to Armenian CSOs, civic activists and other stakeholders on methods of using UN…