The goal of the program was to increase public and government understanding of international standards of Freedom of Expression; to recommend and implement actions to remove the current limitations on the Armenian media, such as a prevailing culture of self-censorship and government control of broadcast media.

The Right to Freedom of Expression (FoE) is guaranteed in the Armenian Constitution; the country is also a signatory to a number of major international and European documents on Human Rights. But a clear understanding of what freedom of expression is and how it should be secured, implemented, and enjoyed is practically absent in Armenia.

EPF launched a project entitled Institutionalizing Freedom of Expression in Armenia as a Right Enjoyed by the Public and Upheld by the State in December 2008. The project aims to help the Armenian public better understand where we stand vis-à-vis FoE, and what they can do to change conditions so that the right to Freedom of Expression is upheld.

The project began with a large-scale public and expert consultation on FoE. EPF then launched qualitative research, commissioned production of six documentaries, and ran a series of talk shows on Yerkir TV. More information on each of these activities follows. At the close of the project, the entire package of materials will become a course on Freedom of Expression for MA students at Yerevan State Linguistic University.

The project is funded by the British Embassy in Yerevan and USAID.

Consultation meeting on Freedom of Expression in Armenia

EPF organized a large-scale consultation meeting on January 30 – February 1, 2009 in Tzaghkadzor. The aim of this consultation was to advance the discussion on freedom of expression and to find out how people from different social strata interpret the issue.

The participants pointed out the obstacles which must be overcome in order to ensure freedom of expression in Armenia. They also discussed the resources which are necessary to overcome those obstacles, and made suggestions accordingly.

Please download a report from the consultation, as well as a summary of findings and recommendations here:

Freedom of Expression in Media. Presentation by Boris Navasardyan

Qualitative research on Freedom of Expression and censorship in Armenia

As a part of the project, EPF carried out qualitative sociological research on Armenian society’s perceptions of Freedom of Expression (FoE) and censorship. The research was conducted in Yerevan and three regions of Armenia, through focus group and in-depth interviews. In particular, the research:

•Examines public perception of FoE, the reasons and ways expression is restricted or self-restricted, and boundaries of FoE;
•Presents the state of censorship/self- censorship and obstacles to FoE in different areas (i.e. for NGOs, media, and in the arts and sciences);
•Presents suggestions for improving the state of FoE in Armenia, targeted to different social institutions.

Findings and suggestions reflected in the research are applicable for a wide spectrum of professionals, including representatives of the government, local and international public and private organizations. A comprehensive presentation highlighting major ideas and findings of the research can be found here:

Documentaries on Freedom of Expression

As part of the project, EPF commissioned six documentary films on issues related to Freedom of Expression.

The films are: Ara Shirinyan’s “Parallel Reality,” Tigran Khzmalyan’s “Armenia minus A1 plus ”, Suren Ter-Grigoryan’s “Infiltration”, Karine Asatryan’s “Freedom of Expression and National Security”, Davit Matevosyan’s “Express yourself Rock the World?” and Armen Yepremyan’s “‘SOS’ Save our Souls/ Timeless Hostages of Overriding Interests.”

Films were broadcasted as a part of the Article 27: the Right to Freedom of Expression Talk Show.

Armenia minus A1 plus (part 1)

Armenia minus A1 plus (part 2)

Express Yourself. Rock the World

Freedom of Expression and National Security

Article 27: the Right to Freedom of Expression Talk Show

Talk shows are broadcast on Yerkir Media TV once a week (June 13 – August 3, every Saturday at 16:45. Rebroadcast each Monday at 15:00) and rebroadcast by the Hamaspyur network in five regions of Armenia (Kapan, Tavush, Shirak, Gegharkunik and Lori). During each show, a locally produced or foreign documentary on different aspects of Freedom of Expression is shown and discussed by journalists, policy makers, professors, experts, NGO and civil society representatives focusing on what can the public do to change conditions so their rights to FoE are upheld.

Topics have included: the right to Freedom of Expression; opportunities during the elections; the existence of independent mass media in conditions of the conflict with Azerbaijan; the overlapping realities in Armenia (rural traditions versus nudity in modern art in the capital); what kind of recourse can be used when the right to freedom of expression is impinged upon; the right to hold peace rallies; and the extent to which music (e.g. rock music) can help express existing opinions.

The reaction of the viewers pushed EPF to continue the series. Film directors gave their films to EPF that were never shown on TV and 3 additional talk shows were produced. “Teghut. The bread of children” by T. Paskevichyan, produced by OSI on pressing ecological issues, “Taken by life” on inhabitants of Lachin produced by Internews with the support of the British Embassy, extracts of “Otarum” by Paskevichyan on the tragedy of the Northern Avenue and Byuzand street and “Gala TV” documentary on the struggle and victory of Gala TV against Tax department produced by Internews were shown and discussed.

Freedom of Expression Project One pager 2009

Freedom of Expression Project One pager 2010 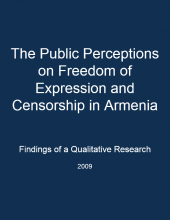 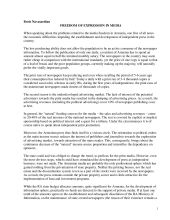 Freedom of Expression in Media. Presentation by…
EPF organized a large-scale consultation meeting on January 30 – February 1, 2009 in Tzaghkadzor. The aim of this consultation was to advance the… 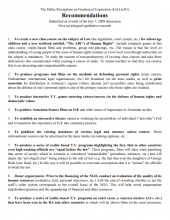 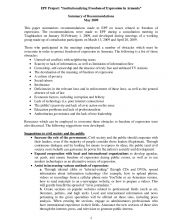 Summary of Recommendations:…
EPF organized a large-scale consultation meeting on January 30 – February 1, 2009 in Tzaghkadzor. The aim of this consultation was to advance the… 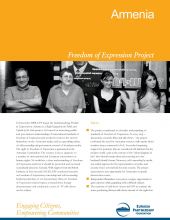 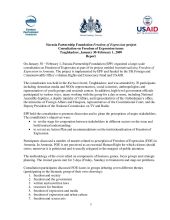 Consultation on Freedom of Expression issues (…
EPF organized a large-scale consultation meeting on January 30 – February 1, 2009 in Tzaghkadzor. The aim of this consultation was to advance the…