The goal of the project was to build ties and to develop a mutual understanding amongst Armenian and Turkish peer groups in the non-government, media, and business sectors, helping them to contribute strategically to state efforts to build relations between the two countries.

Though confidence-building and dialogue processes are highly sensitive, they should be aimed to gradually change attitudes in the long term. The work that EPF and other actors have done so far, including the activities of the Turkish-Armenian Reconciliation Committee (TARC) in earlier years, has demonstrated that it is possible to change the attitudes of large groups of people. Involving a broad cross-section of civil society, business, and government representatives, the program will further emphasize efforts to shape public opinion.

EPF together with the Istanbul-based Global Political Trends Center held Armenia-Turkey policy discussions at the Armenia Marriott Hotel in Yerevan on March 25-26, 2010.

“The meeting today is part of a process to help lay a foundation for greater regional integration, something we believe to be very important that will lead to enhanced regional stability and enhanced economic cooperation and development in the two countries,” - said Ambassador Yovanovitch. She noted that experiences in other countries show that civil society actors, individually, but more often, collectively, have come to play a new and important role in conflict resolution around the world. “Any activity, whether at the elite, middle-range, or grassroots level, aimed at transforming the cross-border relationship, contributes to progress and to an atmosphere more conducive to conflict resolution, and we hope that this initiative will bring us one step closer to improved dialogue and cooperation between Armenia and Turkey,” she said.

Media Coverage of the event can be found here.

A talk show featuring participants from the above mentioned joint meeting aired on Yerkir Media TV in Armenia on March 2010.

A talk show by a prominent Turkish TV journalist Mehmet Ali Birand discussing Armenian youth’s perspective on Arm-Turk relations was aired on Canal D and CNNTurk in Turkey; and on Yerkir Media TV in Armenia.

EPF together with the Istanbul-based Global Political Trends Center held Armenia-Turkey policy discussions in Istanbul and Ankara on July 8-9, 2010.

On July 8, 2010, GPoT hosted a conference titled ‘Turkey-Armenia Policy Discussions’ at Istanbul Kültür University with the participation of Turkish and international journalists, diplomats and opinion-makers. David Hovhannisyan, Ambassador (ret.) and Professor at Yerevan State University, and Joost Lagendijk, Senior Adviser with Istanbul Policy Center at Sabanci University, spoke at a roundtable moderated by Osman Kavala, Chairman of the Board of Anadolu Kultur. The group from Armenia then visited Doğan Media Center to meet with Mehmet Ali Birand, a renowned Turkish journalist, political commentator and writer, and Ferhat Boratav, Advisor to CNNTürk, had a tour of CNNTürk studios.

On the second day of the project, the group was in Ankara to meet with several senior Turkish officials. At the Ministry of Foreign Affairs, Feridun Sinirlioğlu, the Director-General of the Turkish Foreign Ministry, hosted GPoT and EPF. Mr. Sinirlioğlu spoke about the current situation in Turkish-Armenian relations and explained the Ministry’s vision in carrying the relationship forward. The group then visited the Turkish Parliament to meet with Suat Kınıklıoğlu, MP (AKP), Deputy Director of the Committee on Foreign Affairs and Spokesperson for Parliament’s Foreign Relations Commission, and Yaşar Yakış, MP (AKP), former Minister of Foreign Affairs and ambassador. Mr. Kınıklıoğlu and Mr. Yakış also briefed the group on the government’s activities and stance on Armenian-Turkish rapprochement and answered questions.

Hurriyet Daily News's story about the event can be found here.

Today’s Zaman's story about the event can be found here.

The manual contains information and contacts on individuals from both Turkey and Armenia for the purpose of introducing key people and institutions to journalists and NGOs from both countries that want to write about or advocate their issues in the other country. European Stability Initiative developed the manual in Armenian, Turkish and English languages. It is available for download here or can be viewed by clicking the link below.

Trainings for Armenian and Turkish journalists

Training was provided for 15 Armenian journalists on Turkey and for 15 Turkish journalists on Armenia to cover history, culture, current political structure and other issues. Four to five media outlets and up to 20-25 journalists from each country will be trained.

In partnership with the USAID-Arm, NCFA, CAPS, AED, as well as a number of local and Turkish tour operators and associations (e.g. TurSub in Turkey), EPF’s team developed a 5-day familiarization trip throughout Armenia for a group of 8-10 Turkish tour operators, as well as a 6-day familiarization trip throughout Eastern Turkey for a group of 8-10 Armenian tour operators. The trip to Turkey took place in early August 2010 and the trip to Eastern Turkey took place in early September 2010.

On June 28, 2010, EPF announced a call for proposals to produce video reports about Turkey and a series of interviews with political figures and opinion-makers in Turkey. The winning team has been already identified. Yerkir Media TV produced four documentaries and broadcasted them at the end of October. 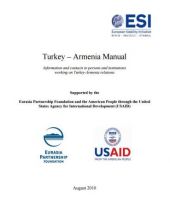