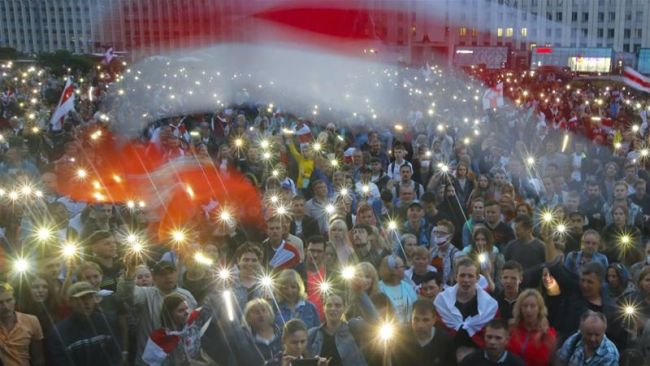 The pro-democracy movement in Belarus is facing challenges similar to the ones Armenians overcame just two years ago.

In the last two weeks, tens of thousands of people have taken to the streets in Belarus to protest against the widely disputed results of the country's August 9 election, which handed President Alexander Lukashenko some 80 percent of the popular vote and a sixth term in office. A police crackdown on peaceful protesters in the days after the vote saw nearly 7,000 demonstrators arrested, and sparked allegations of abuse and torture at the hands of security services. The opposition candidate, Svetlana Tikhanovskaya, who refused to concede defeat against Lukashenko, was forced to flee the country two days after the election.

Lukashenko managed to remain in power for 26 years without facing a significant challenge to his authority by playing the West and Russia against each other. Despite this tactical jockeying, however, Lukashenko always stood closer to Russia, entering his country in Russia-led regional groupings. In 1999, when the then Russian President, Boris Yeltsin, was weak and his power was leaching away, Lukashenko even proposed to unify his country with Russia, with the hope that he would eventually emerge as the leader of the new union. The rise of Putin eliminated such hopes for Lukashenko, but the idea to merge Belarus and Russia remained under consideration. Indeed, Putin started pushing for a merger last year, partly as a way to sustain his own rule beyond 2024.

Among those with strong security and economic ties to Russia, Belarus is only the second state, after Armenia, where people have risen against their Kremlin-backed rulers. As such, Armenia's "Velvet Revolution" in 2018, during which the masses successfully triggered a democratic transition through peaceful disobedience, offers a range of tactical lessons for both the opposition movement and the government in Belarus.

First, the protesters in Armenia worked hard to keep the protests strictly local. They resisted attempts by the ruling forces to frame the protests as another Western-instigated "colour revolution", which would have delegitimised the movement. To achieve a successful democratic breakthrough, the Belarusian opposition should mimic this approach, and capitalise on the grassroots nature of the protests.

Second, the leader of Armenia's protest movement, current Prime Minister Nikol Pashinyan, signalled early, clearly and consistently that the movement, if successful, would not lead to a shift in foreign policy away from Russia. This messaging played an important role in keeping the Russian soldiers in their bases during the revolution. While Armenia's security needs are quite different from those of Belarus, protest leaders in Minsk could also benefit from managing Russia's threat perceptions.

Third, Pashinyan held formal and informal negotiations with incumbent political forces from the very beginning. As a result, Armenia's protest movement unfolded within an imperfect but,  nevertheless, constitutional order. This ensured some level of political stability, increased the perceived legitimacy of the protest movement and emboldened more people to take to the streets - a key marker of successful disobedience campaigns everywhere.

In many respects, the movement in Belarus is similar to Armenia's Velvet revolution of 2018. Just like Armenia, Belarus is a former Soviet nation that still has strong economic, political and social ties to Russia. Both countries are members of Russia-centric regional organisations such as the Collective Security Treaty Organization and the Eurasian Economic Union, and they are both economically reliant on Russia.

But there are also some significant differences between the ongoing protests in Belarus and the Velvet Revolution that took place in Armenia.

Unlike Armenia, there is not a strong civil society in Belarus. In the post-Soviet era, Belarus has always been under a strict dictatorial regime while Armenia has been led by what could be described as "soft authoritarians". This allowed Armenia's civil society enough space to organise itself and consolidate a protest culture through a long string of public protests before an opening for democratic transition appeared in 2018. Such processes are only beginning in Belarus.

But the protest movement in Belarus is perhaps in a better position than Armenia's in a few important aspects - Belarus is not involved in an unresolved regional conflict. In the region, dictatorial regimes often use prolonged conflicts to create a false dichotomy between security and democracy, and silence opponents. This tactic was used by Armenia's pre-revolution rulers for years and is currently being used in neighbouring Azerbaijan by Ilham Aliyev to silence opposition forces inside the country.

It is not surprising, therefore, that Lukashenko is trying to contrive an external threat where there is none. He has claimed, inaccurately, that NATO forces are building up in Eastern Europe, attempting to portray the protest movement in Belarus as a threat to its, and Russia's, security.

Another advantage the pro-democracy movement in Belarus has over the one in Armenia is the democratic character of its immediate neighbourhood.  As I have written elsewhere, the extent of regional connectivity in Russia's vicinities can make or break the Kremlin's incursions into its "near abroad", be they military or hybrid. The democratic consolidation in, and regional ties between, the Baltic states, therefore, is an obvious political asset for the pro-democracy movement in Belarus. Furthermore, Belarus also shares a border with Poland, and therefore the European Union.

This is in sharp contrast to Armenia which is surrounded by authoritarian states, the sole exception being Georgia to its north. The Armenian pro-democracy movement formed a democratic dyad with Georgia, which helped it constrain Russian involvement and complete its Velvet Revolution. Intervening in Belarus would be much more costly for Russia, given the regional resiliency around Belarus from the Baltics to Poland. And unlike in Armenia, Putin's past attempt to formally unite Belarus with Russia created a backlash among the populace in Belarus, exposing the disingenuous nature of Putin's claims of "protecting" Belarus's security and independence. Russian intervention in the context of post-election protests can revive such fears and push more people into the streets.