Please see a publication “The Role of Civil Society in the Implementation of Bologna Reforms in Education”, 2016, by Gevorg Ter-Gabrielyan and Ara Nedolyan.

This is one of the speeches delivered at the “Public Participation in Modernization of Higher Education: the Role of Civil Society in the Implementation of the Road Map of the Higher Education Reform in Belarus” International Conference held in Minsk, Belarus, September 23-24, 2016.

Within the framework of the project an Organizational Activity Seminar (OAS, or a Creative Game) took place at the EPF premises led by the team of Armenian game-technicians and methodologists. The 3-day long event, based on the Methodology of Systemic Thought Activity (MSTA), gathered 40 experts in higher education, media, civil society and IT, as well as students and university staff from Armenia, Belarus and Ukraine. The Creative Game included such group topics as University, Market, Institutional and Normative Framework, and Tradition vs. Innovation.

The Creative Game results were reflected in the report which presents the project ideas, solution mechanisms and policy recommendations. The report was presented in Armenia, Belarus, Ukraine and Brussels. During the EaP CSF Annual Assembly in November 2016 the project was awarded in the nomination of ‘Best EaP CSF re-granting project of 2016. 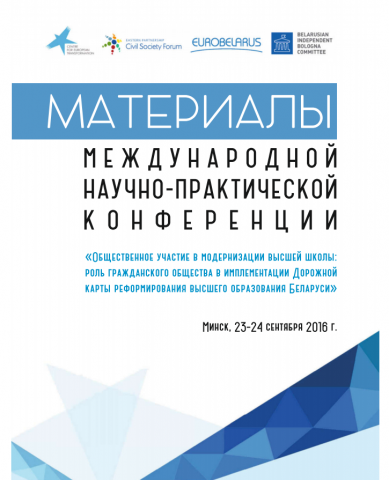