The Paradigm of Transformative Change lies at the core of Eurasia Partnership Foundation’s (EPF) Human Rights Program. EPF works towards changing the structural causes of intolerance, violence and discrimination, as well as the attitudes and behavior of actors. Critical thinking methodology—deconstructing stereotypes, opening up tabooed discussions, changing imposed narratives and perceptions, challenging the notion of ‘the other’—is key to addressing issues of minority rights, the rights of the child, non-discrimination and freedom of expression, areas which are at the heart of EPF’s Human Rights programming.

Promotion of the right to freedom of religion or belief (FoRB) and non-discrimination are the main areas of EPF’s programmatic intervention. EPF is a key civil society organization involved in development of the new draft law on non-discrimination (the Law of the Republic of Armenia “On Equality”) together with the Ministry of Justice of Armenia and facilitating civil society dialogue with the government around adoption of the law. The adoption of a stand-alone, comprehensive law is one of the pre-conditions of the EU Human Rights Direct Support to Armenia. The draft was submitted by EPF to the Ministry of Justice in May 2016. According to the 2017-2019 Human Rights Action Plan, the deadline for adoption by the Parliament is the end of 2017. 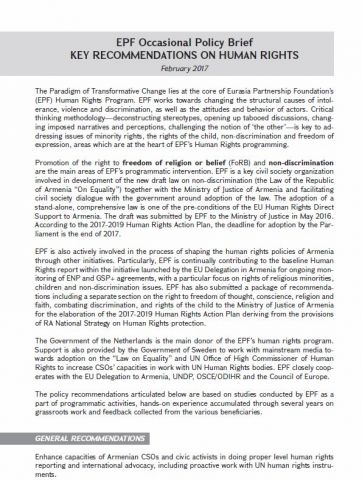