EPF is not only an organization of equal opportunities, but also pays special attention to gender equality and justice.

EPF's approach to gender issues is hinged on its approach to other social issue areas. EPF defines critical thinking as the ability to observe the distribution of power relations in the act of communication, that is, to analyze what goal the communicator is pursuing and what he/she wants to impel the perceiver to do.

In the same way, EPF views the whole sphere of public life as a diverse, balanced or unbalanced sphere of power relations. Cases of unbalanced power relations are often manifestations of some type of violence from one actor of society (individual, organization, limited or long-term institution[1], etc.) against another actor or actors. Balanced power relations are not merely those in which the cooperating actors equally share the “power”, according to their own understanding, but also if, from the point of view of a third party, there is no exploitation in these relations, i.e. where the “agreement” of one of the actors with the given position, is not because of public or social (institutional) pressure and therefore is not a manifestation of structural violence in the course of life. In other words, if the cooperating actors have equal chances using the opportunities provided by society, and their freedom of choice has not been restricted either consciously or “unconsciously”.

This approach not only allows one to “correct” the imbalances that currently exist in public relations (for example, giving people equal opportunities, regardless of gender or other characteristics), but also to profoundly re-evaluate the history of the past in order to properly formulate and implement current reforms. For example, the assumption that there are supposedly specific “occupations” of men and women is based on the distribution of power in past social relations, simply put, on the “map” of structural violence inherited from the past. In the past, there were “few” women writers, not because literary artistry was or is more “specific” to men than women, but because the socio-economic situation of societies did not allow women to find “time” (spare resources), to specialize in that occupation and receive public encouragement for doing that.

In the same way, political activity is not an area based on violence and coercion and “therefore” a “masculine” behavior par excellance: simply social division of duties did not allow women to be as active in that activity as men due to structural violence. As a result, this activity began to be considered “rough”, “immoral”, “offensive”, etc.: traits that are also formulated as indications of “masculinity”. Today’s participants of politics in Scandinavian countries or the peaceful political movement in Belarus are examples of a policy in which women are equal, and where it is not necessary to have the above mentioned characteristics to participate in politics.

The same also applies to other gender stereotypes and prejudices. For example, the case of embarrassing men for engaging in allegedly “feminine” work (childcare or doing the laundry), and depriving them of the opportunity to participate in such work through the combined means of public reproach and the structure of socio-economic relations, also falls in the same category.

EPF, obviously, does not disregard sexual difference between women and men and the social differences that result from it. But in all the above cases the social situations are not directly dependent on biological differences. If in the past people simply did not think about these issues due to economic hardship, in the present day there is simply no need to continue these practices anymore. Humans have already proved historically that they can and should “artificially” build their society and the future, regardless of their biological characteristics. For example, through the creation of artificial technologies humans can soar in the air, although they do not have wings.

Patterns of structural violence, as one can see, have given specific genders an advantage in engaging in a given activity, created obstacles to attempts of changing this situation and have predetermined the ethical-valued “coloring” of certain activities, for example: men should engage in politics and/or war because those are “not a women’s job”.

It is this socio-structural imbalance and the value mindset that EPF challenges in its work.

This approach goes even deeper because, according to a saying attributed to Antoine de Saint-Exupéry, Nazism destroyed thousands of Mozarts, that is, not only were there few female writers in the past centuries because of unjust socio-economic systems, but all genders, including a large number of male creative people, were not able to bring their talents to fruition because of socio-economic and political difficulties (first and foremost, a culture of widespread violence). Thus the phenomenon called “structural violence” determined the type of civilization we live in, including the behavioral culture of today's societies and the trajectories (“path dependency”) of the political economy of today. Thus, addressing the gender issues, among alia, is, by nature, political and goes to the heart of the issues of fairness and human dignity as prerequisites for the development of the global human civilization.

And so today we must not only fight for gender equality, but also work on re-evaluation of what humanity and history would have been like if gender inequality had not been there, and if power imbalances had not so deeply distorted the face of human history. And it is from the point of view of that re-evaluation that gender inequality is unjustified today. That re-evaluation requires not just upholding equality today, but “positive discrimination.”

A question arises: imagine that in one case there are a hundred male writers, and fifty male and fifty female writers in another case. Isn’t the variety of their outputs sufficient in both cases? In other words, is it not discriminatory to consider that one of the genders is so important that the absence of its voice has impoverished humanity’s merits in the fields of beauty, production, development, and humanization? Naturally, the answer is no. Fifty male and fifty female writers, as well as the equal presence of all possible genders in any group, enabling people to express their views from different gender “angles”, enriches diversity and hence also the merits and well-being of humanity. In the absence of diversity, truth suffers, as it is only accessible by gaining insight through the combination of multiple approaches.

And the many instances of encroachment on the truth that we are witnessing today in the digital age, in the conditions of the internet “post-truth” “pandemic”, are also proof that defending the truth is difficult because there have been so many approaches that are missed in today's human “voice library,” including class, racial, ethnic, cultural, gender, geographical, religious, linguistic and other varieties.

The time has come to restore the pluralism of humanity in all possible spheres. This will only help to establish the truth, and it is the best way to defend against encroachments on the truth.

There is one more "criticism" of gender equality policy. Its essence is that, since humanity is built on the notion of man as the dominant gender (patriarchy), women's active entry into the public sphere only strengthens its power-unjust, hierarchical, violence-based structures, since the structure, being perpetual, dictates the actor's behavior. Thus, female judges or teachers in Armenia have not changed the corrupt, ineffective nature of these institutions, and there are many women in the public sphere who express aggressive ideas and values.

It should be understood here that EPF does not consider, and there is no reason to believe, that women, as mothers, sisters, wives, bear more “humane” or “gentle” values than men. Equalizing the rights of females and other genders with that of males, the formation of pluralism, and freedom from discrimination will simply enrich the plethora of common approaches. The question is not what values “women in general” hold; the issue is that for centuries half of society has been deprived of power for public presence and equal participation in public activities. It is clear that lifting this ban will enrich society. The struggle for gender equality has been going on for a long time and is still going on. The appearance of “male nurses” alongside the  “female nurses” was at the time a small revolution. Imagine how many new concepts and their corresponding phenomena would have developed if there had been no gender or other types of discrimination in societies. Sometimes it is helpful to look at humanity in such a different way (Lyotard’s The Differend fits here too). For example, instead of rigid hierarchical systems, teamwork might have been more advanced. Instead of the concept of “leader”, the concept of “facilitator” might have been more widespread; leadership and power might have been defined not as a rigid hierarchy based on the threat of violence, a top-down pyramidal system, but as responsibility, a bottom-up pyramid; the institution of the “Ministry of Development” might have been established in many countries sooner than it was; instead of corrupt judges, civil mediators – reputable people, whom parties address voluntarily to settle disputes amicably outside of the judiciary, could have played a much bigger role. There might be many social roles in the world which have not yet appeared or have already unjustifiably faded, and maybe many roles which exist wouldn’t have existed – for example, the roles of “thief-in-law” or “kyartu”. Let's think about what these new social roles, professions, social subjectivities should be as we are still going through the process of institutionalizing gender equality.

Let us end with a well-known story about the first female member of the US Supreme Court: the late Ruth Ginsburg.

“How many women do you think should be in the nine-member Supreme Court to be fair?” She was once asked.

“Nine,” she replied, which aroused much surprise.

“There have been nine men for centuries, but that did not come as a surprise,” Ruth said.

[1] EPF, following the approach of Max Weber and Douglass North, defines an institution as a lasting network of human relations, based on certain “rules of the game”: behavioral, cultural, management and other “written” and “non-written” laws. 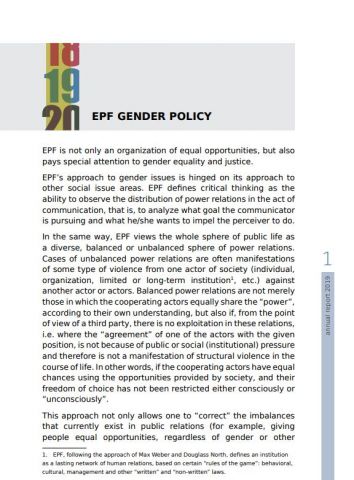