Armenia has traditionally been seen as an origin country for migration and a transit point for migrants heading elsewhere, predominantly to the Russian Federation and the West. However, although official statistics continue to record net emigration, the country has recently experienced a year-on-year increase in the arrival of immigrants seeking to work and study.

When the migration balance changes in any country, the authorities and people inevitably need time to adjust, and Armenia is no exception. When the number of migrant arrivals was negligible, Armenia took a reactive approach to third-country migrants, primarily because they could be fairly easily integrated within existing social and official (government) structures. However, a significant and rapid rise in new arrivals has threatened to increase migrant vulnerability and created issues relating to access to information and basic services (e.g. health care, education and social protection). The threat has become considerably more severe due to the state of emergency precipitated by the COVID-19 pandemic. In response, this assessment was initiated by IOM Armenia under the regional project, Enhancing Migrants’ Rights and Good Governance in Armenia and Georgia, funded by the Norwegian Foreign Affairs Ministry. It was conducted by Eurasia Partnership Foundation and covers the April–May 2020 period, when strict lockdowns and public limitation rules were introduced by the Government of Armenia. 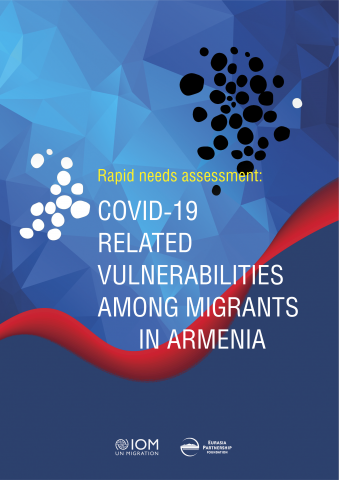