The original source of the document can be found here.

On  2  April  2017, Armenia held parliamentary elections under the new Constitution which shifted the Armenian semi-presidential system of governance   to   a   parliamentary   one. Elections   were   observed   also by a Delegation   from   the   European   Parliament.   These parliamentary elections under the new Electoral Code were well-administered and fundamental freedoms were generally respected.   However, credible reports identified widespread vote buying, intimidation of civil servants and private company employees as well as abuse of administrative resources prior to Election  Day, which contributed to an overall lack of public confidence and trust in the elections.  The  EU has contributed financially to electoral assistance meant to increase the safeguards against possible electoral fraud and has encouraged the Armenian law enforcement bodies to conduct a credible and swift investigation into all alleged criminal offenses related to elections and to prosecute in accordance with the law.

The  EU  and Armenia negotiated the Comprehensive and Enhanced  Partnership  Agreement (CEPA) as a new legal basis for their cooperation. It was initialled in March 2017 in Armenia. The CEPA represents a modern, comprehensive and ambitious agreement, covering political, economic and sectorial cooperation in fields such as transport,  energy,  communication, financial services, regional development, health and education.  It will broaden the scope of EU-Armenia relations and will have as a basis shared common values and a strong commitment to democracy, human rights and the rule of law.

From  20  to  23  June  2017,  a  GSP+  monitoring  mission  took  place.  It made ten concrete suggestions for priority actions, with a particular focus on the protection of human rights (including investigation of excessive use of police force), the judiciary, legislation against domestic violence and against discrimination,  labour  rights  and labour inspection, fight against corruption and protection of endangered species.  The  GSP+  monitoring  mission presented these suggestions  to the relevant Government ministries and agencies during a meeting on 23  June  2017.  The  Armenian authorities submitted information about the implementation of the priority actions in October 2017.

The  entry  into  force  of  the  new  Constitution  in  early  2018,  with  a  number  of  human  rights-related  provisions,  will  be  an  important  milestone  with  regard  to  the  Government's intention to  ensure  the  implementation  and  enforcement  of  legislation  as  strategic  programming
documents. 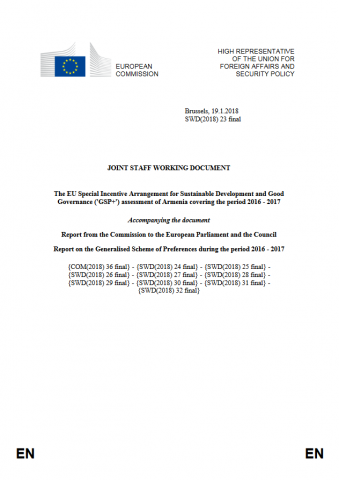 Promoting Human and Labor Rights in Armenia through GSP+