EPF addressed anti-corruption programming directly several times over recent years. In addition, various areas of its work, such as targeting the enhancement of democracy, freedom of information and expression, good governance, Armenia’s approximation to the EU etc., all include an anti-corruption component.

Program Goal – to increase the role of Armenia’s government, civil society organizations and media in the fight against corruption.

Since the Government of Armenia launched a national anticorruption strategy in 2003, new amendments to laws on taxation, customs procedures, financial disclosure, procurement, lobbying, education and healthcare have been adopted by the National Assembly. Despite these changes, a number of recent studies demonstrate a decline in Armenia’s progress in the fight against corruption, and they identify the misuse of public funds and nepotism as major obstacles to the country’s economic and political development.

In response to these trends, in April 2006 Eurasia Partnership Foundation (EPF) organized a conference in cooperation with the National Assembly of the Republic of Armenia, the Organization for Security and Cooperation in Europe (OSCE) and the United Nations Development Program (UNDP), which brought together over 300 representatives from the government, the NGO sector and the media to discuss obstacles to improved government transparency. The recommendations that emerged from this conference emphasized the need for a new, comprehensive anticorruption initiative that focuses on developing the capacity of the government, civil society and the media to monitor government activities, building cross-sector partnerships for improved government transparency and promoting policy reform.

Based on these recommendations, EPF has developed a program for increasing the role of Armenia’s government, civil society organizations and media in the fight against corruption. Launched in 2007, the program will build upon EPF’s existing relationships with key government officials, who have demonstrated a willingness to combat corruption, as well as with established partners in the media and NGO sectors.

Trainings for NGO representatives and journalists in investigative reporting, monitoring of government activities, use of Armenia’s Law on the Freedom of Information, budget analysis, and international best practices in civic monitoring will increase the ability of participants to promote government transparency. Forty participants from twelve media outlets and twenty-two NGOs were selected based on their dedication to serving youth, women and other vulnerable populations and to combating corruption in the health, social service and education spheres. Training for government representatives from the local, regional and national levels will strengthen their capacity to develop and implement anticorruption and anti-discrimination policies related to procurement, contracting, and the hiring, firing and promotion of staff; to conduct budget analysis as it relates to gender and underprivileged groups; and to detect fraud.

Eight grants for NGOs, media outlets and journalist associations were awarded to support activities that build upon the topics listed above. These activities include a series of round table discussions and TV talk shows on corruption; a campaign to increase the ability of local government to respond to citizen requests for information that are made in accordance with the Law on the Freedom of Information; public awareness campaigns in six marzes of the Republic on the application of the Law; and civic monitoring activities targeting the traffic police, the civil service, schools and local government.

A National Anticorruption Network of government bodies, NGOs and media organizations will be convened to develop and coordinate anticorruption strategies between these three sectors. Eurasia Partnership Foundation will work closely with the network to develop its internal structure and strategy. The network will design and manage a web-based Resource Center for Anticorruption that will provide the public with access to information on anticorruption activities in Armenia and provide government and civil society representatives with access to training curricula, tool kits and case studies. Study tours to Europe and the CIS for representatives of government, civil society and the media will allow participants to examine successful anticorruption models and to establish partnerships with peer organizations abroad.

Eurasia Partnership Foundation will provide grant support to the National Anticorruption Network as it seeks to promote needed policy reform in the area of anticorruption, including the development of draft whistleblower legislation.

EPF has developed a program for increasing the role of Armenia’s government, civil society organizations and media in the fight against corruption. The program will build upon EPF’s existing relationships with key government officials as well as with established partners in the media and NGO sectors. 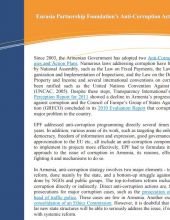 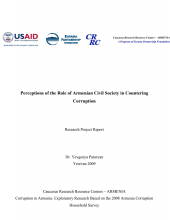 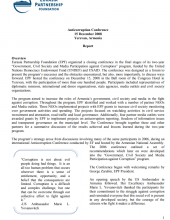 Report on the results of Anti-Corruption Conference
On December 15, 2008, EPF organized a closing conference for the final stage of the “Government, Civil Society, and Media Participation against…