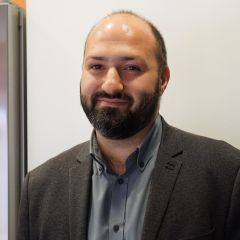 Dr. Mikayel Hovhannisyan has aroud 18 years of experience of working with civil society in Armenia and South Caucasus. He has been involved in both formal and non-formal civil society organizations and initiatives in spheres of youth, education, public participation, local government, peace building, human rights and democratization. He is currently the consortium manager of the five-year Civic Engagement in Local Governance (CELoG) project that is funded by USAID and is being implemented by six Armenian CSOs. As CELoG Consortium Manager Mikayel is responsible for ensuring effective and communicated activities of the consortium, as well as for activities being implemented by EPF within the framework of the project. From November 2014 until November 2016 Mikayel was twice elected as the National Coordinator of the Armenian National Platform of the Eastern Partnership Civil Society Forum, a platform membered by more than 220 Armenian CSOs working in sphere of European Integration and EU-Armenia cooperation.

Mikayel has previously managed EPF’s Addressing the Conflict of Interest (CoI) Policies Implementation Project dedicated to the monitoring of the state institutions level of understanding of CoI policies and Europe Program that included research, public outreach, cooperation with civil society, governmental institutions and European organizations in such frameworks as Eastern Partnership and the Bologna Process.

As member of the EPF cross-border team Mikayel Hovhannisyan also actively participates in implementation of Armenian-Turkish, Armenian-Azerbaijani and Armenian-Georgian projects. His previous experience includes working in Human Rights and Media Projects at UNDP Armenian Office, diaspora-funded Birthright Armenia Foundation and different civic initiatives active in spheres of freedom of speech, freedom of assembly, democracy and higher education. He is also member of the Armenian Methodological Committee a non-formal organization working in sphere of development and practicing of collective thinking methodologies.  Dr. Hovhannisyan is also invited professor at Yerevan State University, Department of Oriental Studies, where he teaches courses on Medieval Muslim Philosophy, History of Ismailism and Medieval Muslim Social and Political Thought.

Mikayel is the Chair of the Board of Trustees of "Restart" Scientifically-Educational Charitable Foundation.