The project “Youth Community Peacebuilding through New Media” aimed at initiating dialogue between the youth in Armenia and Azerbaijan through new media and social networks. This project is financed by Swedish International Development Cooperation Agency (SIDA) and British Foreign & Commonwealth Office (FCO) through the British Embassy in Armenia and Azerbaijan.

The idea behind the current project was developed on the basis of achievements and lessons learned from the previous projects. EPF in cooperation with FCO had already implemented two similar projects, namely the ‘Unbiased E-Media Coverage in Armenia and Azerbaijan” and ‘Armenia-Azerbaijan Media Bias Project” targeting the bilateral relations between Armenia and Azerbaijan, as well as the unbiased coverage of the Nagorno Karabakh conflict. 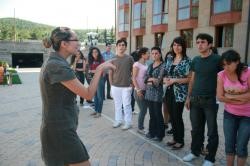 The kick-start of the project were three-day workshops held in Tsakhkadzor and Yerevan, respectively on August 10-13 and August 26-28 in 2011. The workshops brought together the preselected 40 young people mainly from the regions of Armenia, who were introduced to the techniques, ethics and strategies of efficient journalism through new media by high profile trainers from Radio Free Europe (Artur Papyan) and Internews (Gegham Vardanyan). In addition, EPF country director Gevorg Ter-Gabrielyan held a special session on critical thinking and analysis of creative texts. Each working day was concluded with a Q&A session welcoming the comments and questions from all the participants. During the discussions, a number of cartoons, blogs and films were presented to the participants. All these media products were the outputs of cooperation between Armenian and Azerbaijani youth within the scope of the aforementioned Armenia-Azerbaijan projects, implemented by EPF with financial support of FCO. Of particular interest was the film www.war featuring the Internet wars between Armenia and Azerbaijan. The film is a relevant material for discussing the online wars and the complicated problem of peace journalism. Consequently, the workshops helped the participants in considerably improving their skills in new media, as well as developing a critical insight into printed and electronic texts. In the aftermath of the workshops, the participants created a Facebook page for further interaction and discussions.

Building Bridges between the youth in Armenia and Azerbaijan 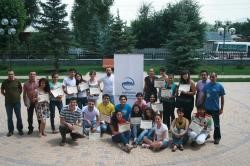 By the end of the workshops, all the participants were offered to submit ideas for Armenia-Azerbaijan joint projects. It was a pre-condition that all the projects should have been Internet-based and implemented with a partner from Azerbaijan. As a result, EPF got 21 project proposals, out of which 13 were selected by the joint decision of trainers and donors. The 15 authors of the submitted projects were invited to participate in the regional meeting held in Tbilisi, which, in essence, was the first meeting between the young people from Armenia and Azerbaijan within the framework of the project. The event aimed at bringing together the young people from both sides, as well as offering a medium for discussions and cooperation. The trainers also facilitated group works and team building between the young people. The intensive works over the projects and active discussions yielded 10 joint small-scale projects that were submitted to EPF offices in Baku and Azerbaijan at the end of October. Further, the Selection Committee of both offices voted for the projects, out of which the most successful eight were awarded small grants for implementation, amounting up to USD 2,000. In order to refine the project implementations plan and timeframe, the young grantees met in Tbilisi on November 13-15, 2011. During the meeting, the participants of previous Armenia-Azerbaijan projects joined the discussion and shared their experience and lessons learned with the newcomers.

The following months were an intense period of cooperation, numerous Skype calls and discussion between the young partners from Azerbaijan and Armenia. The project outputs, ranging from joint animations to Skype conferences were presented at the final meeting in Tbilisi on May 15-16, 2012.

Within the scope of EPF project “Article 27”, five talk shows on Armenia-Azerbaijan relations were broadcast on Yerkir Media featuring different aspects of the issue. It is noteworthy to state that the viewership of the talk shows was at least 3000 people per each broadcast. Moving beyond the TV format of talk shows, EPF held its first ever large-scale open public discussions on Armenia-Azerbaijan relations in Yerevan in late February 2012. Three public discussions tackled the issue of unbiased media coverage of Armenia-Azerbaijan relations, the ethics of war and peace journalism, as well as the role of culture in peace-building. Each discussion had a moderator and invited three speakers representing mainstream and new media, civil society and academia, and politics and culture. The public discussions were covered by the Armenian media and gained significant public attention with an overall attendance of 210 people. In addition, a closed screening and discussion of the film www.war was held for the international organizations and diplomatic missions in Armenia on February 28, 2012. All the discussions were held at Henrik Malyan Theatre. The discussions are available here.