Policy Brief Recommendations on Freedom of Religion or Belief

The area of freedom of thought, conscience, religion or belief is presently regulated by the law “On freedom of conscience and religious  organizations,” adopted by the Supreme Council of the Republic of Armenia back in 1991, prior to the adoption of the Constitution of Armenia, based on the USSR Law “On freedom of conscience and religious organizations.” Bearing in mind the fact that the Law has a number of deficiencies,  contradictions and fails to comply with Armenia’s international obligations, the Ministry of Justice of Armenia (MoJ) has developed and circulated on June 1, 2017 the draft law (the Draft) on “Making Amendments to the Law of the Republic of Armenia on the Freedom of Conscience and on  Religious Organizations” and amendments and/or supplements to adjacent laws1 through the Governmental www.e-draft.am website without duly notifying relevant stakeholders and with rather restricted timing for discussions – until July 2.

The civil society organizations and religious communities with which EPF is in regular contact had already articulated several concerns regarding the Draft.

This paper was developed in February 2018. 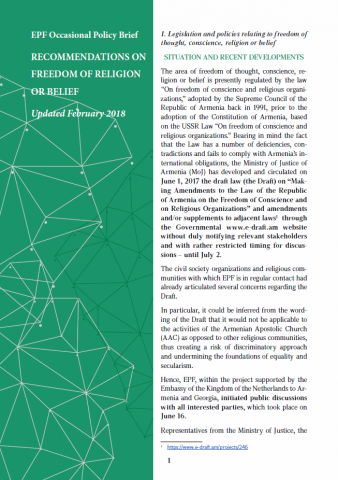